From Zelda Dungeon Wiki
Jump to navigation Jump to search
Want an adless experience? Log in or Create an account.
Bean Seller 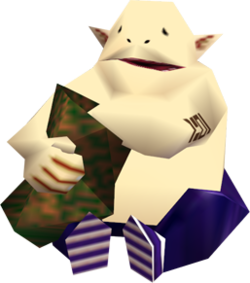 The Bean Seller is a character in Ocarina of Time and Majora's Mask.

Magic Beans can be planted in soft soil when Link is a child. Once planted, these beans grow into magic leaves and are able to carry Link to otherwise inaccessible areas as an adult. The Bean Seller can be found sitting beside Zora's River during Link's childhood. Every time Link buys a Magic Bean from him, the next Magic Bean will cost an additional 10 Rupees.[1] Along the way, he makes up titles to make the beans seem rarer, an excuse for the rising prices. He will stop selling magic beans after Link has bought the last one worth under 100 Rupees.[2]

Termina's counterpart to the Bean Seller from Ocarina of Time does nearly the same thing as his parallel; selling Magic Beans and eating beans. His Hyrulean self ate beans even after the Magic Beans were sold out, so it is likely that the beans he is seen eating are not the same as those he sells. This strange man makes his home in a secret grotto in the Deku Palace, and his presence is probably unknown to the Deku Royal Family. He says he doesn't get much business, likely due to his location. When they first meet, he gives Link a free Magic Bean pod, but from then on he sells them for 10 Rupees each.