From Zelda Dungeon Wiki
Jump to navigation Jump to search
Want an adless experience? Log in or Create an account.
Hot Rodder Goron 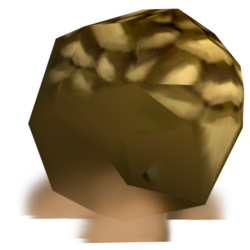 The Hot Rodder Goron is a giant Goron from Ocarina of Time.

The Hot Rodder Goron lives in Goron City and can be found "wild rolling" non-stop on the second floor. He can only be seen as a child, and is the third-largest Goron after Medigoron and Biggoron. He has put a sign in place saying that anyone who can stop him, they "might get something great".[1]

When Link throws a Bomb at him, he will stop and explain to Link that he doesn't want anyone to interrupt him because he wants to relieve his stress[2]. However, if Link throws a Bomb and interrupts him in the enclosed corridor near the sign, he will give Link a Bomb Bag upgrade (either the Big Bomb Bag or Biggest Bomb Bag, depending on what Link has) "in praise of" the young hero's courage[3].

If Link throws a Bomb at him after being rewarded, he will thank Link and joyfully continue with his wild, wild rolling.[4]