From Zelda Dungeon Wiki
Jump to navigation Jump to search
Want an adless experience? Log in or Create an account.
Twin Jugglers 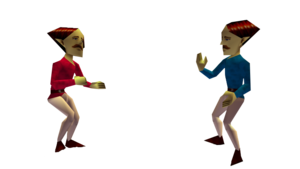 The Twin Jugglers are characters in Ocarina of Time and Majora's Mask.

When Link is a child, the Twins reside in Hyrule Castle Town. Upon Link's first arrival in Hyrule Castle Town, the two are talking about an attempt one of the Twins made on breaking into Hyrule Castle, effectively revealing the way to get ahead to Link. Shortly before Link's arrival, the twin dressed in blue attempted to sneak into the castle to meet Princess Zelda. He sneaked past the Royal Guard, swam through the moat, and tried to crawl through the drain hole on the side of the castle, but he could not enter it due to his size.[1] As a result of this, the castle guards tightened security in the castle.[2] This knowledge can be used by Link to sneak into Hyrule Castle to meet the Princess.

When Ganondorf takes over Hyrule, the Twins retreat to Kakariko Village, where they stay in different houses. Here, one of the Twins claims to have seen the ghost of the gravekeeper Dampé holding a strange object.[3] The other does not believe him and states that the other Twin is still as hilarious as back in Hyrule Castle Town.

The Twin Jugglers work for the Gorman Troupe theater company practicing for the Carnival of Time. They often poke fun at each other with their belief that despite how grim a situation might get, always keep people smiling. The Red Twin Juggler tends to make more indelicate jokes and act blunt while the Blue Twin Juggler is more sensitive and welcoming. At night, they enjoy playing card games with each other.

During the day, Link can find them practicing their juggling at East Clock Town, while at night they are playing cards in the Stock Pot Inn.