This article is about Link's form after using the Goron Mask in Majora's Mask. For the Gorons named Link in Ocarina of Time and Majora's Mask, see Link the Goron. 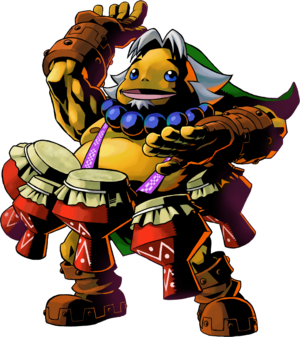 After obtaining the Goron Mask from using the Song of Healing on Darmani in Majora's Mask, the great Goron hero who died trying to get to Snowhead, Link can put on this mask and become Darmani or another form of Darmani if you's like. This is one of the four transformation masks of the game and is one of the most useful. Goron Link features tattoos on both his arms which resemble the Hylian Crest and the Goron Symbol.

While in Goron form Link's Ocarina takes the form of the Drums of Sleep. These drums are popular among Gorons, and they are needed to give effect to the Goron Lullaby melody. There are two instances where the Drums of Sleep are necessary. To calm the screaming Goron Elder's Son, Goron Link must play the Lullaby Intro. The young Goron will then stop crying and teach Link the rest of the Goron Lullaby. The sound of the drums will calm the Elder's son, and he will fall asleep. Armed with the Lens of Truth, Drums of Sleep and the full Goron Lullaby, Goron Link must play for the sleeping, invisible Biggoron. The song will cause Biggoron to doze off and fall into the abyss, clearing the way to Snowhead Temple. The massive Goron will, however, return once Goht has been defeated, albeit in a very confused state.