From Zelda Dungeon Wiki
Jump to navigation Jump to search
??? 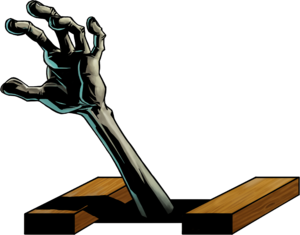 ???, also known as Phoeni in the Prima Games Skyward Sword Strategy Guide,[3] is a mysterious hand that first appeared in a minor side quest in Majora's Mask, and has appeared in both Oracle of Ages and Skyward Sword since.

"In the original Legend of Zelda game, a gigantic hand appears and grabs you at the entrance to a dungeon. Actually, that has nothing to do with Skyward Sword. [Laughs] It's actually something from a Japanese ghost story. Not a specific ghost story. There are some ghost stories in Japan where — when you are sitting in the bathroom in the traditional style of the Japanese toilet — a hand is actually starting to grab you from beneath. It's a very scary story."

??? makes its first appearance in Majora's Mask. It can be found inside the rest room of the Stock Pot Inn in Clock Town.[2] ??? appears as a dull-colored hand that stretches out of the toilet. It is found here on any night from 12 AM to 6 AM. ??? is one of the twenty characters that has a spot in the Bombers' Notebook.

If Link enters the Stock Pot Inn and talks to ??? in the aforementioned timeslot, ??? asks Link for paper.[5][6] Link can satisfy ???'s need for paper by giving it any of the Title Deeds or Letters.[7] ??? immediately exclaims with joy,[8] and then disappears into the toilet. A few seconds later, ??? re-surfaces, and tells Link that he saved them.[9] As thanks, ??? offers Link a Piece of Heart which had previously fallen into the toilet.[10] This completes ???'s spot in the Bombers' Notebook.

??? resides in the Toilet in Western Lynna City in the Past in Oracle of Ages. Its hand reaches out of a hole in the ground. Link can drop numerous items into the hole, including various Mystical Seeds, a pot, Bombs, and Bombchus. Depending on which item is dropped into the hole, ??? responds differently, giving a reaction that relates to the item dropped in.

??? plays a pivotal role in the Oracle of Ages Trading Sequence. After Link acquires the Stationery from the Postman, he can give it to ???. After apparently using it to wipe itself, ??? gives Link the much less desired Stink Bag. Link later uses the Stink Bag in order to clear the sinuses of the Tokay Chef.

In Skyward Sword, ??? has a slightly larger role than in previous titles. Additionally, it was confirmed to be female by Fi,[1] and looks more like a glove than a hand. Just like in Majora's Mask, ??? in Skyward Sword is asking for paper from within a toilet;[11] the toilet that is inside the Knight Academy on Skyloft. After speaking to ??? for the first time, Link can find Cawlin just outside the toilet door during the day. He asks Link to deliver a love letter to Karane.[12] At this point, the side quest can go in two different directions.

Firstly, Link can choose to give the letter to ???; this causes ??? to fall in love with Cawlin after reading the letter.[13] If Link visits Cawlin in Groose's room at night, ??? can be seen stroking Cawlin's back, giving him nightmares. Since ??? is so happy at this new found love, she rewards Link with five Gratitude Crystals. Unfortunately, Cawlin is unable to sleep for the rest of the game, as ??? stays with him every night.

The second option of this side quest is to give the letter to its intended target: Karane. After reading the letter, Karane becomes unsure of whether or not she wants to go out with Cawlin. Speaking to Pipit upstairs makes him realize how much he really loves Karane. Going back downstairs triggers a cutscene, where both Pipit and Cawlin ask Karane out, and Karane chooses Pipit. Cawlin runs off crying. Because the letter was not delivered to ???, ??? is not seen for the rest of the game. However, Link does receive five Gratitude Crystals from Pipit.