From Zelda Dungeon Wiki
Jump to navigation Jump to search
Want an adless experience? Log in or Create an account.
Bombers Secret Society of Justice 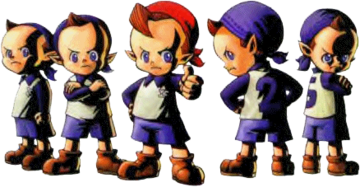 The Bombers Secret Society of Justice are a gang of children who appear in Majora's Mask.

The Bombers reside in Clock Town and have a secret hideout that leads to the Astral Observatory. Though the Bombers have five main members, their ranks total six, as one is posted as their Hideout guard. The Bombers have apparently existed for quite some time, as Professor Shikashi states that Kafei was once a member. The current leader of the Bombers is Jim. Before the events of Majora's Mask, The Bombers allowed Skull Kid to join, before realizing his evil intentions and cast him out.

The Bombers aid Link's quest by allowing him to join their club and gain access to the Astral Observatory via their hideout. After a game of hide and seek, the Bombers reveal to Link their secret code. Link is required to do this only once as a Deku Scrub, however upon asking his fellow members, Jim says that he cannot formally recognize a Deku Scrub as a Bombers member. If Link does this a second time as a human, he will be added to their ranks, and given the Bombers' Notebook. Alternatively, if Link manages to correctly guess the password to their hideout before playing hide and seek, Jim is impressed by Link's initiative and rewards him with the notebook regardless.

For the 3DS Version, there is one Bomber in each of the five locations within Clock Town:

The goal of the Bombers' is to solve everyone's problems. If Link joins their club while he is a Hylian, then he is given the Bombers' Notebook. Alternatively, Link can also enter their hideout with the same code given to him as a Deku. Upon his exit, the leader will approach him and give him the Notebook. The Bomber's Notebook contains the secret Bombers' passcode, and slots for people with problems. The notebook is marked once those problems are solved. The notebook also contains the rewards for these tasks, and the time slots that each sidequest can be completed.