Fierce Deity Link is a playable character in Majora's Mask. After obtaining all twenty four masks in the game and trading them to the Moon Children Inside the Moon, the last child rewards Link with the Fierce Deity's Mask, an all-powerful item that can only be used in boss rooms. Consequently, Fierce Deity Link, the deity that Link becomes when dawning this mask, has the ability to defeat any Boss in the game quite easily using the power of the Double Helix Sword and Sword Beams, but can only exist in boss rooms.

There are five bosses in Majora's Mask that Fierce Deity Link can combat. After completing the game once through, Link may revisit any bosses from the past and feel free to defeat them using the Fierce Deity's Mask. Below are the bosses from the game that can be battled, and detailed descriptions of how they may be defeated.

Odolwa may just be the easiest to defeat as Fierce Deity Link. If Link locks on to Odolwa and begins slashing, Sword Beams will target Odolwa automatically and bring it down in a matter of seconds. Attacks against the boss directly will do damage quickly, but it is best to simply strike it down from afar using Sword Beams and then hone in for the kill. Since this warrior has no good way of defending itself from Sword Beams, it is pretty much a matter of seconds before Odolwa falls to the ground. The lock-on is truly a blessing here, but it really makes the fight much less exciting than it was originally.

Goht is a much different beast than the rest of the boss fights. Because Link originally fights Goht in a racetrack arena and must keep up with the mechanical monster's pace as a Goron, Fierce Deity Link has no hope of moving alongside Goht. Instead, it is wise to wait for the boss to make a full round around the racetrack and time the Sword Beams perfectly to strike. Remember to stay in the same spot while doing this. It is rather difficult and takes a long time if the player is not coordinated. It is fairly unlikely that Fierce Deity Link will be hurt, since Goht just keeps on rolling in circles. Defeating Goht as the Fierce Deity is heavily reliant on patience, and patience will certainly be rewarded in this case. It probably provides a healthier challenge than fighting Goht normally. 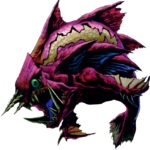 Gyorg, like Goht, moves around a lot. But its territory is the water, not a racetrack. Likewise, Fierce Deity Link will find some challenge in defeating Gyorg, even as the formidabe Fierce Deity. Gyorg will occasionally flip out of the water and try to knock Link into the water, and in these instances, just climb back on to the platform. Instead of using a combination of Arrows and the Zora magic barrier to harm the fish, Fierce Deity Link has the luxury of simply firing Sword Beams at the expense of magic. Several beams won't seem to hurt Gyorg as they don't travel quickly enough to hit it while it is moving. It is best to strike from the platform while Gyorg is still.

Twinmold, the fourth boss battle of Majora's Mask, is probably the most painstaking of the bosses to defeat using the Fierce Deity's Mask. Since the Giant's Mask was the intended instrument of Twinmold's destruction, remaining relatively the same size won't exactly make the battle easy. Because Link is not huge, Twinmold will pose a much greater threat as it is perhaps the largest Zelda boss in history. The tails and heads of the worms are still their weaknesses, though the limited range of the Sword Beams and the incredible speed of the Twinmold worms will make it frustrating to actually get up close and strike the tails and heads. Sword Beams won't be very effective here. It is easier to just allow the worms to tunnel into the sand. The tails will only be in Link's target range for a split second, so it is important for the player to take the initiative and strike swiftly. After battling Twinmold as Fierce Deity Link, players likely won't want to do it again. 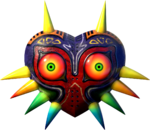 Not surprisingly, Majora's Mask, Majora's Incarnation and Majora's Wrath aren't too difficult to take down. Since the mask was specifically designed for optional use during this battle, it would make sense that each phase of Majora is highly susceptible to the abilities of Fierce Deity Link. Locking on to Majora in all of its phases and spamming the Sword Beam is enough to defeat the final boss in a short amount of time. Even the quick-moving Majora's Incarnation is no match for the Fierce Deity.