"This armor is rumoured to have been worn by the hero of a world in which the moon threatened to fall. The tales say that when he wore it, he felt fierce, godlike power flowing through him." 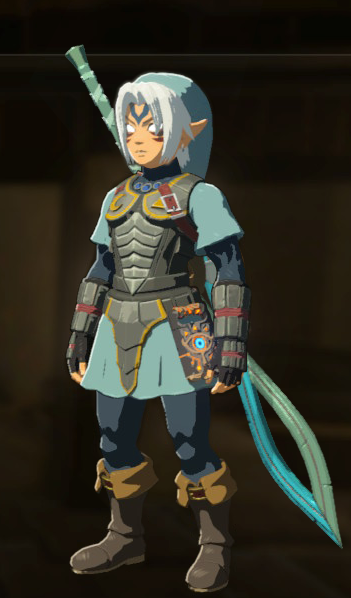 The Fierce Deity Set is an Armor set from Breath of the Wild, designed after Fierce Deity Link from Majora's Mask.

The Fierce Deity Set is obtained through the use of the Amiibo rune and scanning the Link (Majora's Mask) Amiibo. This Amiibo can only be scanned once per day (real day, not in-game day). When scanned, this Amiibo drops various items, with a small chance of dropping a chest containing one piece of the Fierce Deity Set. The Drop Rates are highly disputed, but the best estimate for how often a piece of armor drops is about a 10% chance each piece of armor. Due to the nature of how it is obtained, it can be obtained either early, mid, or late game, or never. This depends on when one receives the chest after scanning the amiibo. The amiibo may also drop the Fierce Deity Sword.

This set is very similar to the Barbarian Set, however, it is an amiibo exclusive item and is much easier to obtain through save scrubbing than having to complete all three labyrinths for the Barbarian set.

Each armor part requires parts from one of the three dragons in the game:

Enhancing Armor requires that you have unlocked as many Great Fairy Fountains as the desired star-level.