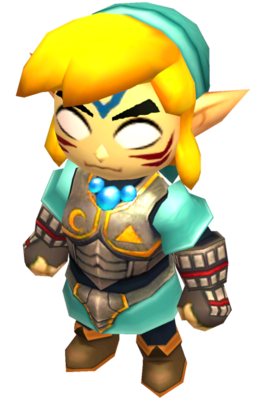 The Fierce Deity Armor is an outfit in Tri Force Heroes, and a piece of armor in Breath of the Wild. 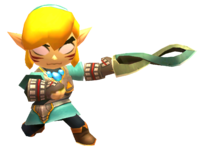 "Legend has it this armor once belonged to the hero of a world in which the moon threatened to fall. When you wear it, you feel a fierce, godlike power flow through you."

In Breath of the Wild, the Fierce Deity Armor is an amiibo-exclusive piece of torso armor.

It has a base defense of 3, and can be obtained by scanning the Link (Majora's Mask) amiibo, through the use of the amiibo Rune. Scanning the amiibo will drop various items from the sky, along with a treasure chest, which has a chance of containing the Fierce Deity Armor, but can also contain different items. The amiibo can only be scanned once per day.

Enhancing Armor requires that Link has unlocked as many Great Fairy Fountains as the desired star-level.