Throughout all the Zelda games, there are many outfits that Link can wear to help him get through his journey. 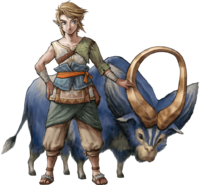 In games including The Wind Waker, Twilight Princess and Spirit Tracks, Link is first seen in "civilian" clothes, distinct from the classic becapped outfits he has traditionally been associated with. Usually, these outfits are replaced forever - initially with a version of his traditional green tunic - early in the game, but there are exceptions; such as Spirit Tracks, where 15 stamps in Niko's Stamp Book allows Link to revert to his Engineer's Clothes. 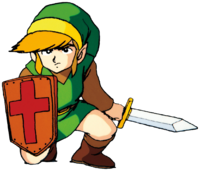 In the majority of the Zelda games, Link's main outfit is a green tunic and a green elf-like cap inspired by the character Peter Pan. As the standard outfit, it typically does not convey special powers or abilities.

In The Legend of Zelda, A Link to the Past, Link's Awakening DX & its Switch remake, Oracle of Seasons, Oracle of Ages and A Link Between Worlds; Link's blue outfit represents an increase in resilience - that is, the same hit from the same enemy will deal less damage. In several of those games, a red outfit represents a further improvement.

The Magic Armor of Twilight Princess is a special case - while this red and gold outfit completely protects Link from damage, it does so at the cost of Rupees, both as a constant drain and as a payment for every hit. Consequently, it can only be used sparingly.

The Great Fairies of Breath of the Wild can increase the defence of most outfits available to Link, at a cost of rupees and materials - although some outfits, such as the Soldier's Set, can be raised to a higher defence rating than others.

In Link's Awakening DX, the Nintendo Switch remake of Link's Awakening and the Oracle Series, Link's red clothing represents increased attack power. The blue/defence and red/attack outfits can be interchanged.

Some outfits in Breath of the Wild, such as the Ancient Set, provide increased attack against a certain type of enemy, typically as part of a Set Bonus.

In Ocarina of Time and Twilight Princess, the Zora Tunic and Zora Armor are used to help Link breathe underwater. These allow him to explore deeper in conjunction with the Iron Boots, such as for entering the Water Temple and Lakebed Temple.

These outfits enable Link to enter areas of high heat that would cause damage to him otherwise. 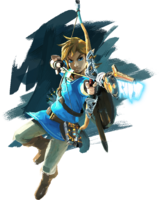 In Tri Force Heroes and Breath of the Wild, Link's clothing options have increased exponentially. This extends in Breath of the Wild to a complete revamp of Link's "default" outfit as the light blue Champion's Tunic, without a hat. Many of these other outfits provide specialist effects in areas other than simple damage or attack power.