From Zelda Dungeon Wiki
Jump to navigation Jump to search
Want an adless experience? Log in or Create an account.
Dark Set 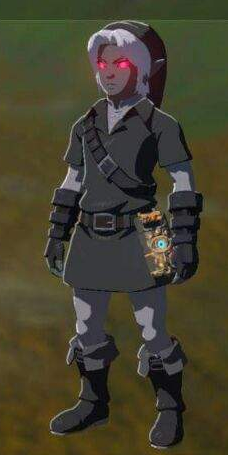 The Dark Set is an Armor set from Breath of the Wild and Hyrule Warriors: Age of Calamity.

The design is reminiscent of previous iterations of Dark Link, but more closely of the Interlopers from Twilight Princess - as both appearances share the bright, red eyes - although it uses the same model as the Hero of Time Set, based on Ocarina of Time's Kokiri Tunic & Boots. The Dark Set armor cost a handful of Mon and is relatively expensive for its value, giving Link the same effect of night speed up in which the upgraded Stealth Set grants him making it not worth purchasing in terms of gameplay. Despite this, the Dark Set does have a nice classic Dark Link Zelda look to it that many players may favor.

The pieces of the Dark Set can be purchased from Kilton at the Fang and Bone after defeating the four Divine Beasts.

The Dark Set's abilities are identical to those of the Stealth Set in terms of Link's increased speed at night, but with no stealth.

The set also provides the effect of making non-enemies react with fright at its unnatural appearance. Also, in spite of being developed from Kilton's Monster research, Link is still detectable to enemies while wearing it.

This set is the only complete set obtainable in the base game that can be neither upgraded nor dyed.