This article is about the boots Link got as a forest child. For other sorts of boot, see Boot (Disambiguation). 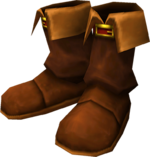 The Kokiri Boots are Link's default footwear in Ocarina of Time and Majora's Mask.

In Ocarina of Time, these boots are commonly worn by the Kokiri and have no special properties about them when compared to the added weight of the Iron Boots or the tractionless Hover Boots, although they are the only boots that can be worn both while Link is a child and an adult. They are best used during normal scenarios in which the properties of the other two types are not required.