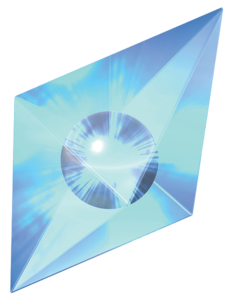 Official Artwork from Ocarina of Time
In Other Languages[show][hide]

Nayru's Love is one of the three spells of the Goddesses that Link receives from the Great Fairies in Ocarina of Time. The other two spells are Din's Fire and Farore's Wind. Using Nayru's Love makes a blue crystal-like shield appear around Link. Link does not take damage while Nayru's Love is working, but strong attacks still knock him back. Ganon will still hurt Link, though. While using it, Link is unable to use any other items that require magic. When used, Nayru's Love disappears after a little less than a minute.

This item is only available near the end of the game. After Link has completed the Shadow Temple and freed the Carpenters from the Gerudo's Fortress, he can head through the gate into the Haunted Wasteland. When Link traverses through the desert, he arrives at the Desert Colossus. If Link follows the wall on the right, he finds two palm trees. Link can then use a bomb between them to reveal an entrance to the Great Fairy's Fountain. Play Zelda's Lullaby on the Triforce symbol on the platform. The Great Fairy appears and relinquishes Nayru's Love.