From Zelda Dungeon Wiki
Jump to navigation Jump to search
Want an adless experience? Log in or Create an account.
Din's Fire 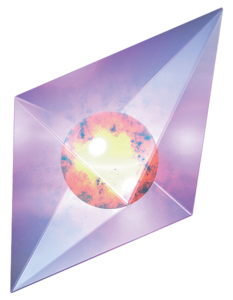 Official Artwork from Ocarina of Time

Din's Fire is a type of magic that appears in Ocarina of Time. It is one of three spells Link can learn in the game.

Like Farore's Wind and Nayru's Love, Din's Fire is bestowed upon Link by the Great Fairy of Magic, specifically at the Great Fairy's Fountain found near Hyrule Castle during Link's childhood. This fountain can only be accessed after obtaining Bombs from Dodongo's Cavern.

When used, Din's Fire creates an expanding sphere of flames around Link, which damages nearby enemies, lights torches, burns away obstacles. It is necessary to enter the Shadow Temple by lighting the collection of torches found near the entrance, thus making this the only spell that is required to complete the game. Din's Fire will consume magic power with each use.