From Zelda Dungeon Wiki
Jump to navigation Jump to search
Want an adless experience? Log in or Create an account.
Giant's Knife 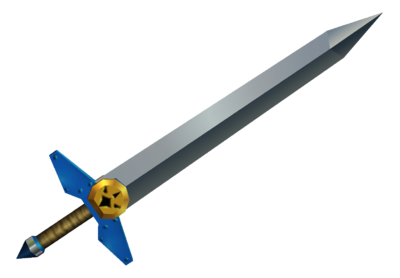 Model of a Giant's Knife from Ocarina of Time 3D

The Giant's Knife is an item in Ocarina of Time. It is a powerful, but fragile two-handed sword.

"A large, keen, yet easily broken, blade. You can't use a shield while wielding it."

In Goron City, Link can go to the second floor where Medigoron's Blade Store is found. It is blocked by stone walls, which Link can simply blow up with Bombs or Bomb Flowers. If Link speaks with Medigoron, he will tell him that he is working on "something really cool", which will take him five or six years to finish. When Link returns as an adult, he can purchase Medigoron's small sword for 200 Rupees. However, after hitting it eight times or four times at enemies, it breaks, and is reduced to the power of the Kokiri Sword. It can be repaired by Medigoron for another 200 Rupees, but will break again in use.

As a two-handed weapon, Link cannot use his shield while wielding it, and will only bend down if the shield button is pressed with it in-hand. It does twice as much damage as the Master Sword.[1]

There is a similar blade made by Biggoron that Link can acquire after completing the Trading Sequence. Unlike the Giant's Knife, Biggoron's Sword never breaks.[2]