From Zelda Dungeon Wiki
Jump to navigation Jump to search
Want an adless experience? Log in or Create an account.
Light Medallion 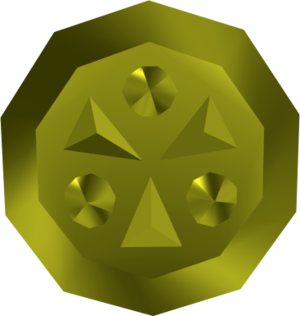 "You received the Light Medallion! Rauru the Sage adds his power to yours!"

The Light Medallion is the first of the six Medallions Link receives in Ocarina of Time. He receives this Medallion after awakening as the Hero of Time. The ancient Sage of Light, Rauru, will greet Link after he has awakened from his seven-year slumber after he has pulled the Master Sword from its pedestal.[1] Rauru will explain to Link of his great destiny as the Hero of Time.[2][3][4] Rauru will then give Link the Light Medallion. Link will then return to the Temple of Time to proceed with his quest to save Hyrule.