From Zelda Dungeon Wiki
Jump to navigation Jump to search
Want an adless experience? Log in or Create an account.
Sacred Realm 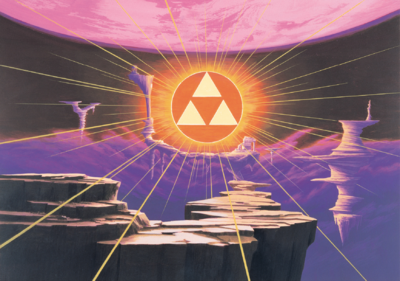 The Sacred Realm is the eternal resting place of the Triforce. After the three Golden Goddesses, Din, Nayru, and Farore, had finished creating Hyrule, they departed from their creation. The spot were the Goddesses descended became to be known as the Sacred Realm. At the center of this Golden Land there lay a sanctuary, namely, the Temple of Light. This is where the Triforce, the most powerful relic in all of Hyrule, was put to rest.

"In a realm beyond sight, the sky shines gold, not blue. There, the Triforce's might makes mortal dreams come true." 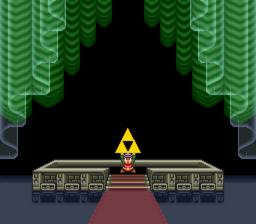 Link retrieving the Triforce in A Link to the Past

This game tells of a man named Ganondorf, who one day stumbled upon the gates to the Sacred Realm. He located the Triforce, and in his lust for power, he murdered his men so that he might have full control over the golden triangles. Ganondorf's wishes came true, and the evil in his heart plagued the Golden Land, corrupting the once sacred place of refuge. Ganondorf's wicked heart soon consumed him, and he turned into a dark, powerful beast, a beast named Ganon. The power he now controlled was not enough, he quickly waged a war against Hyrule, killing relentlessly, blinded by his longing for ultimate control.

The forces he fought against in the Imprisoning War, the Seven Wise Men, and hundreds of brave Knights of Hyrule, came to the conclusion to lock Ganon away in the now Evil Realm. Though many battles were still yet to come. Ganon planned for centuries to make his return. He continued to send the Sacred Realm into complete ruin, until it was then called the Dark World. His desire, his wish, was to break the long held seal between the Dark World, and Hyrule.

It was then, that Link, was awakened with a task. After collecting the three Pendants, and gaining possession of the Master Sword, he fought the Dark Wizard Agahnim, one of Ganon's pesky follower's who served him from the Light World. Agahnim sent Link into the Dark World, believing to have trapped him there, but it was from there that Link gained knowledge of Ganon, and what he had done to the Sacred Realm, and it was from there that he learned he had the power to reverse these effects.

Ensuing the rescue of the Seven Maidens, Link battled against the Prince of Darkness, and Thieves, Ganon. When Link finally killed the beast, the restoration of the Sacred Realm began. Link retrieved the Triforce, and his wish cleansed the Golden Land to what it had once been.

"For it is in that Sacred Realm that one will find the divine relic, the Triforce, which contains the essence of the gods..." 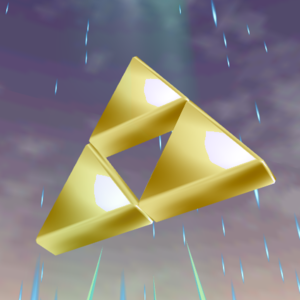 This tale starts out with a boy, Link, who learns from his guardian, the Great Deku Tree, of the Sacred Realm, and its holiness. He is sent on a mission to journey to Hyrule Castle, and meet with the "Princess of Destiny", Princess Zelda. Zelda informs Link of a man who is visiting the Castle, and that she envisioned him as a shroud of dark clouds covering Hyrule, and a boy with a fairy, holding the Kokiri's Emerald, rushing to save the day.

"When evil rules all, an awakening voice from the Sacred Realm will call those destined to be Sages."

Zelda asks Link for his help in her quest to stop "The evil man" from gaining access to the Sacred Realm. He agrees, thus trekking throughout Hyrule, collecting the other two Spiritual Stones. On Link's way to the Temple of Time, the gate to the Golden Land, he stumbles upon a wild chase between Zelda, Impa, and Ganondorf. Zelda throws the Ocarina of Time into the moat surrounding Hyrule Castle Town. Link then uses it to enter the Sacred Realm, he pulls the Master Sword from the Pedestal of Time, but since he was too young to become the Hero of Time, he is put to sleep for seven years, and this is when Ganondorf uses Link as his free pass into the Sacred Realm. When Link awakens seven years older, Rauru, the light sage, describes what took place while he was asleep. He informs Link of his new task of seeking out the other sages, so that together, they can imprison Ganon in the now Evil Realm.

With the help of the sages, Link defeats the beast, Ganon, and the seven sages seal Ganon away in the Golden Land, which was now, his binding prison.

"Those who do not know the dangers of wielding power... Will soon be ruled by it." 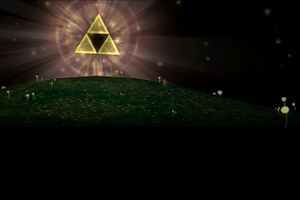 The Sacred Realm and Triforce as seen in Twilight Princess

The story the Light Spirit, Lanayru tells Link is told in a... Different way. Lanayru describes early life, saying that everyone was once content in mind and body alone. Though it wasn't long before word of the Sacred Realm spread amongst the people. A war was imminent. A tribe, the Dark Interlopers, who lusted for command of the Triforce, created a "dark magic" known as Fused Shadows. The wicked tribe used this magic to get what they longed for; ultimate control. The goddesses intervened, designing the four Light Spirits, Lanayru, Eldin, Faron, and Ordona. These spirits chased the Dark Interlopers across the face of Hyrule, forcing them into another world, namely, Twilight. The Interlopers settled in their prison and became the Twili.

A Link to the Past Locations[edit][hide][show]
Retrieved from "https://www.zeldadungeon.net/wiki/index.php?title=Sacred_Realm&oldid=354118"
Categories: