From Zelda Dungeon Wiki
(Redirected from Hero of Time)
Jump to navigation Jump to search
Want an adless experience? Log in or Create an account.
TODO: Expand OOT adult text, rewrite MM text from the start of D1 onward from scratch
Care to do so?
Link 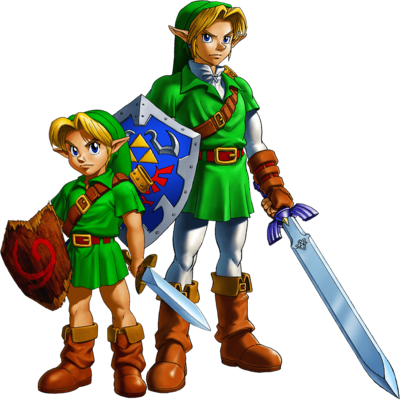 Link is the hero of Ocarina of Time and Majora's Mask, who was given the title of Hero of Time by Rauru, Sage of Light.

"Navi... Navi, where art thou? Come hither.... Oh, Navi the fairy... Listen to my words, the words of the Deku Tree... Dost thou sense it? The climate of evil descending upon this realm... Malevolent forces even now are mustering to attack our land of Hyrule... For so long, the Kokiri Forest, the source of life, has stood as a barrier, deterring outsiders and maintaining the order of the world... But...before this tremendous evil power, even my power is as nothing... It seems the time has come for the boy without a fairy to begin his journey... The youth whose destiny it is to lead Hyrule to the path of justice and truth... Navi...go now! Find our young friend and guide him to me... I do not have much time left. Fly, Navi, fly! The fate of the forest, nay, the world, depends upon thee!" 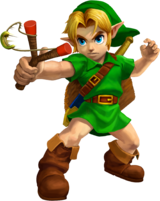 Link is a child of destiny born during the Hyrulean Civil War. Though he is actually Hylian, he was left with the Great Deku Tree as an infant by his mortally wounded mother and thus was raised as a Kokiri in the forest. He is often picked on by the other Kokiri kids for not having a fairy companion like every other Kokiri. Mido in particular ridiculed Link often, partly also due to jealousy over Link's close friendship with Saria. He is a very courageous and noble individual who is always willing to take up a difficult challenge to help those dear to him.

At the beginning of the game, when he is nine years old[1], Link is having a nightmare. In it, the sky is pitch-black & stormy, a bridge is lowered across a moat, a woman and a young girl on a white horse ride by, and a sinister-looking man with dark skin and red hair rides on a black, armored horse appears right behind Link when he looks back. When the Great Deku Tree, the guardian of the Kokiri, is cursed by Ganondorf for not handing over the Spiritual Stone of the Forest, he sends Navi the fairy to become Link's fairy companion. After obtaining a sword and shield, Navi takes Link over to see the Great Deku Tree, who explains to Link about the curse and asks Link to break it. Link travels inside the Great Deku Tree and defeats the monster Gohma, who was sent there by Ganondorf, thus breaking the curse. However, the Great Deku Tree was going to die either way, so with his final breath, he tells Link the creation story of Hyrule and the Triforce. He gives Link the Kokiri's Emerald, the Spiritual Stone of the Forest, and sends Link out to Hyrule Field to speak with Princess Zelda. Before Link leaves the forest, he is given the Fairy Ocarina by Saria, which allows him to play the various magical songs that are key to gameplay.

Link journeys to Hyrule Castle and finds Princess Zelda, who explains Ganondorf's evil plan to obtain the Triforce and take over Hyrule. She tells Link that he must go find the other two Spiritual Stones before Ganondorf can get a hold of them. Link first travels to Goron City atop Death Mountain, where he obtains the Goron's Ruby after gaining the Goron people's trust by clearing the monsters Ganondorf unleashed in Dodongo's Cavern. He then travels to Zora's Domain, where he obtains the Zora's Sapphire after rescuing Princess Ruto from the parasites that Ganondorf cursed the deity Lord Jabu-Jabu with.

With all three Spiritual Stones in hand, Link travels back to Hyrule Castle Town, only to have his haunting dreams come to pass. Princess Zelda and her aide Impa dash by on a white horse, but Zelda manages to throw the Ocarina of Time into the moat during her escape. Ganondorf appears right behind Link and asks which way they went. Link refuses to tell, drawing his sword and shield, to which Ganondorf simply blasts him with a ball of energy. Ganondorf then proclaims that he will soon rule the world and rides off. Link finds the Ocarina of Time in the moat, and upon finding it receives a vision from Zelda, teaching him the Song of Time, the final key to opening the Door of Time. With the three stones and now the Ocarina of Time, Link is able to open the Door of Time in the Temple of Time and access the Master Sword's chamber. When he pulls the sword out, however, he is frozen in time by the Master Sword, as it did not recognize a child as young as him to be the Hero of Time. 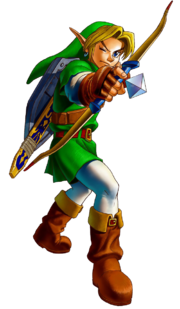 After being frozen in time and allowed to age for seven years, Link has finally become old enough to hold the title Hero of Time. He is awakened by Rauru, the Sage of Light, in the Chamber of Sages, who explains that when Link opened the Door of Time, Ganondorf was able to enter the Sacred Realm and take the Triforce of Power, since his unbalance heart prevented him from claiming the full Triforce. During Link's seven-year slumber Ganondorf used his newfound power to take over Hyrule. Rauru tells Link that he must awaken the other five sages in order to defeat the King of Evil.

With the Sages awakened, Link returns to the Temple of Time to find Princess Zelda waiting for him. She explains that he holds the Triforce of Courage and gives him the Light Arrows before being captured by Ganondorf. Link enters Ganon's Castle to save her and to face Ganondorf, first in his Gerudo form, then in his beastly Ganon form after the castle collapses. With Ganondorf defeated and sealed away, Link is sent back to his own time to relive the childhood that he missed during his seven-year slumber. After being sent back, he found he was in a time before he had ever touched the Master Sword. While Navi flew away, her job done, he went to tell the young Princess Zelda what had gone wrong to avoid it happening again.

"In the land of Hyrule, there echoes a legend. A legend held dearly by the Royal Family that tells of a boy... A boy who, after battling evil and saving Hyrule, crept away from the land that had made him a legend... Done with the battles he once waged across time, he embarked on a journey. A secret and personal journey... A journey in search of a beloved and invaluable friend... A friend with whom he parted ways when he finally fulfilled his heroic destiny and took his place among legends..."

Link apparently stayed with Zelda and the Royal Family for a while after his second "first meeting" with her. During this time, he obtained the young Epona as his permanent steed. Eventually, after what Zelda felt was only "a short time", he decided to take Epona and leave Hyrule on a personal quest, implied to be a search for Navi. While saying their goodbyes, she told him she was sure they would meet again and would pray for him to have a safe journey. She also gave him the Ocarina of Time and retaught him the Song of Time, telling him the Goddess of Time was protecting him, and if he played the Song of Time, the Goddess would aid him. While she waved goodbye, the Song of Time lingered on his mind.

Subsequently, while travelling through the Lost Woods, Link is accosted by a pair of fairies, who startle Epona and knock him to the ground, unconscious. With him out cold, the fairies are joined by a Skull Kid wearing a mysterious mask, who rifles through his pockets and takes the Ocarina. As the three are arguing over the instrument, Link wakes up and confronts the thieves, but the Skull Kid dodges him, leaps on Epona and starts galloping away; with Link barely managing to cling on before they are out of reach. Dragged through the woods, Link is eventually flung off as the Skull Kid and his fairies gallop into a tunnel.

Recovering once again, he walks into the tunnel, only to find himself falling through a huge shaft with strange lights and symbols surrounding him.

Landing on a Deku Flower, he finds himself confronted by the Skull Kid, now hovering in the air and flanked by his fairies, Tatl and Tael. Skull Kid complains that Epona wouldn't listen to a word he said, "so [he] did [Link] a favor and got rid of it." Seeing Link's anger, the Skull Kid mocks him, and then attacks him with a strange wave of energy. After being tormented by visions of Mad Scrubs, Link comes back to full consciousness to find himself turned into a Deku Scrub. After Skull Kid laughs at Deku Link, telling him he'll stay that way forever. As Skull Kid begins to float out of the room, Link attempts to chase after him, but is knocked back by Tatl. Unfortunately for the yellow fairy, this means that when the door is slammed shut, she's left behind with Link.

With no sense of irony, Tatl blames Link for her becoming separated from her brother, and demands "Deku boy" do something. When Link just stares at her, she grudgingly apologises and asks that he take her with him, offering to sell out the Skull Kid's location and help Link in return for his helping her to reunite with Tael. With few other options, Link shrugs and agrees.

Once they make it through the door, they find themselves inside a Clock Tower, where the Happy Mask Salesman observes that he's met with a terrible fate. Telling him that the mask the "imp" was wearing was stolen from him, he offers to return Link to his normal self if he can retrieve the Ocarina of Time, and the mask stolen from him, within three days.

Link learns the Skull Kid has caused mischief across the new world he has entered called Termina, and that he is trying to get the Moon to crash into Clock Town and destroy the world at the end of Day 3. Link gets the Ocarina of Time back and uses the Song of Time to transport him and Tatl back to the beginning of Day 1. The Happy Mask Salesman turns Link back to a Hylian, leaving a mask behind that will allow him to turn back to the Deku Scrub whenever he wants. Link now must awaken the 4 Giants in the 4 compass directions to prevent the Moon from falling, and must repeat the same 3 days over and over until he can awaken them. After saving the Deku Princess and removing the poison from the Southern Swamp, bringing Snowpeak to spring, saving the Zora eggs and clearing the fog from Great Bay, and bringing peace to souls in Ikana Canyon. Link stops the Moon from crashing into Termina, but the mask the Skull Kid was wearing, called Majora's Mask and harnessing dark evil powers, takes over the Moon itself. Link lands on the moon through the portal left from Majora's Mask dark powers, and defeats Majora in his Mask, Wrath, and Incarnate forms. Link then leaves to return to Hyrule and continue his search for Navi.

Hyrule Historia suggests that the Hero's Spirit from Twilight Princess is the ghost of the Hero of Time.[2]