From Zelda Dungeon Wiki
Jump to navigation Jump to search
Want an adless experience? Log in or Create an account.
Village of Outcasts 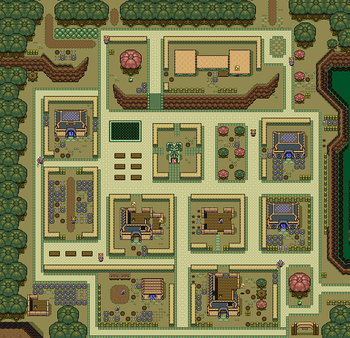 Village of Outcasts in A Link to the Past

The Village of Outcasts is the Dark World version of Kakariko Village. It is only found in The Legend of Zelda: A Link to the Past, and there is a Dungeon, called Gargoyle's Domain.

"A Collection of Thieves and Hooligans"
"Before Ganon's reign, this village was populated by a law-abiding citizenry. There was little crime and the villagers looked out for one another. When the Golden Land became the Dark World, though, they were transformed into despicable shadows of their former selves."

"Visitors to the Village of Outcasts were given many opportunities to part with their Rupees. Not only were robbers picking the pockets of travelers on the village paths, but more legitimate means of thievery were being practiced as well. Three nearby establishments were dedicated to assorted forms of gambling."

"Village robbers would bump into unsuspecting visitors and gather up any valuables that had fallen to the ground."

"Pickpocket Population"
"The Village of Outcasts inhabitants took anything they could from passersby. There's no telling why the village was transformed from a peaceful hamlet to a thieves' town, but it serves as an example of what can happen when evil has control over a powerful force."

A Link to the Past Locations[edit][hide][show]
Retrieved from "https://www.zeldadungeon.net/wiki/index.php?title=Village_of_Outcasts&oldid=395532"
Category:
Hidden category: