From Zelda Dungeon Wiki
Jump to navigation Jump to search
Want an adless experience? Log in or Create an account.
Zora's Waterfall 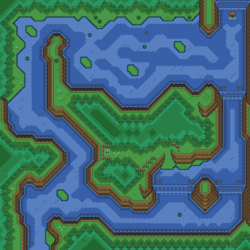 Zora's Waterfall, also referred to as Zora's Lake, is a location featured in A Link to the Past.

The main attraction at Zora's Waterfall is King Zora, located at the northeast corner of the Waterfall. When Link walks up to him, King Zora will come out from underwater, asking what Link wants. Link can purchase Flippers for 500 Rupees. In addition to giving Link the Flippers, King Zora will grant Link access to the Whirlpool Waterways that are found throughout the Overworld.

After acquiring the Flippers from King Zora, Link can swim directly southward from where the King was found. Link can jump down the waterfall here to reach a land area in the center of Zora's Waterfall. A Piece of Heart is tucked away to the west.

A Link to the Past Locations[edit][hide][show]
Retrieved from "https://www.zeldadungeon.net/wiki/index.php?title=Zora%27s_Waterfall&oldid=451684"
Category: