From Zelda Dungeon Wiki
Jump to navigation Jump to search
Want an adless experience? Log in or Create an account.
Ancient Stone Tablets 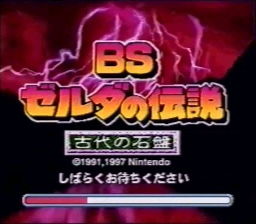 The game was built on A Link to the Past, and uses largely the same overworld but with different dungeons, resembling the later A Link Between Worlds in some respects. However, as with some other Satellaview games, it was designed to be played only "live" in a one-hour weekly time slot for four weeks, outside of which the game was not available for play. During the live broadcast period, including approximately fifty minutes of actual playing time and cutscenes to open and close, sound was broadcast, including The Legend of Zelda: Sound & Drama tracks and voice acting for characters including Aginah and Princess Zelda.