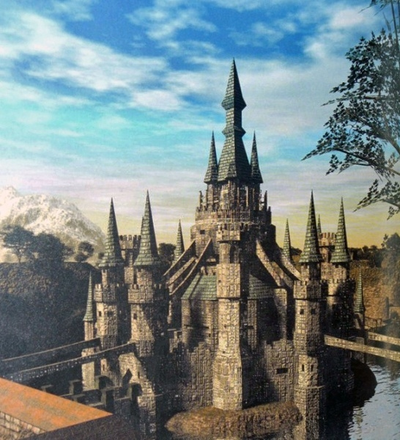 Artwork from Twilight Princess
In Other Languages[show][hide]

Hyrule Castle is the seat of Hyrule's government and home of the Royal Family. Hyrule Castle was first seen in A Link to the Past, and has become one of the most recognizable locations of The Legend of Zelda series.

Main article: Hyrule Castle (A Link to the Past)

In A Link to the Past, Hyrule Castle serves as the very first dungeon in the game. It is a rather short dungeon where Link fights the Ball and Chain Soldier and rescues Princess Zelda. Hyrule Castle leads to the Secret Passage, which takes Link and Zelda to the Sanctuary.

Later in the game, Link enters Hyrule Castle Tower, where he confronts Agahnim.

Hyrule Castle in Ocarina of Time only allows Link to enter the courtyard to speak to young Princess Zelda. Link must sneak past the guards to get to her. There are no dungeons or mini-dungeons within this version of Hyrule Castle.

Hyrule Castle in The Wind Waker is underwater. It is where our young hero finds the Master Sword. The castle starts out with a black and white coloring until Link retrieves the fabled Sword of Evil's Bane (the Master Sword), which then turns the castle back to color. 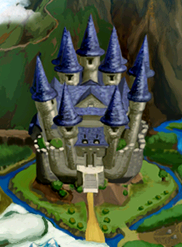 Hyrule Castle is a dungeon in Four Swords Adventures that Link visits twice. The first time is the third stage of Whereabouts of the Wind. The Links attempt to rescue the first Maiden from the evil Castle Guards. While there, Link reunites the two halves of the Queen of Fairies, making her whole again. Link must fight Phantom Ganon in order to find the Maiden.

The second visit is during the Near the Fields level. This time, Link must use stealth to avoid being seen by the guards, who will throw Link into a jail cell if found. Once finally making it past the guards, Link needs to defeat Jalhalla in order to rescue the White Maiden.

Hyrule Castle in Four Swords Adventures highly resembles the one from A Link to the Past.

Link firsts visits here under the order of his grandfather to deliver the Smith's Sword, which is to be awarded to the winner of a sword tournament at the Picori Festival. Vaati wins the tournament, but holds no interest in the sword whatsoever. Instead, he attempts to steal the Picori Blade and instead he manages to break the blade and turn Princess Zelda to stone. Link then must use the Elemental Sanctuary to restore the power of the blade, and, after a while, the king appears to change his mood dramatically. In fact, this is due to the fact Vaati is disguised as the king, and ultimately decides to transform the castle into the Dark Hyrule Castle.

Filled to the brim with guards who do not really do anything, Hyrule Castle in Spirit Tracks is a lot like the one in A Link to the Past, but with no dungeons. This is where Link gets his Engineer Certificate, Recruit Uniform, and most importantly, his Sword.

Hyrule Castle is located in the center of Hyrule, and is completely accessible to Link after leaving the Great Plateau. However, the difficulty is significantly increased, and it is wise to avoid the area until completing other areas and dungeons. Hyrule Castle is the final dungeon in Breath of the Wild, and the location of the trapped Princess Zelda and Calamity Ganon. 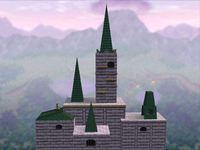 "A tornado spins about the stage, wreaking havoc on all that cross its path."

Hyrule Castle is the penultimate dungeon in Cadence of Hyrule, situated in the center of Hyrule and the only location in the game that isn't randomly placed. It is the home of the king of Hyrule, who Octavo puts to sleep when he takes over the castle, and the first two Legendary Weapons in the game: Caladbolg and the Royal Rapier. After Octavo is defeated, a portal to Future World opens in the castle leading to the final dungeon in the game.

In the Future World, Hyrule Castle is a dark, dreary castle standing in a crumbling kingdom. The castle is now home to Ganon (or The NecroDancer in Octavo's Ode) and the final Legendary Weapon: Eli's Greatshovel.