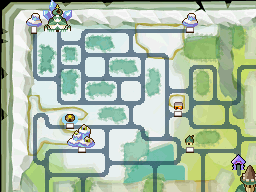 The Snow Realm (Snow Land in the European/Australian version) is one of the four realms in Spirit Tracks. It is the second realm to be accessed in the game, found in the north-western quadrant of New Hyrule's map, and is home to Ferrus, Steem, and the Anouki race.

The Snow Realm is a cold area filled with snow and plagued by blizzards in some area especially in proximity to the Snow Temple. Most of the enemies here are ice-based, based on the climate, such as Sir Frosty. This cold weather makes it possible to transport Mega Ice without melting it.