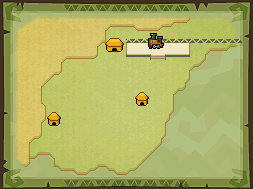 Aboda Village, also known as Outset Village in the European version, is the starting location of Spirit Tracks. It is a small village in the southwestern corner of New Hyrule, found within the Forest Realm. It is situated next to the ocean, and there is a beach at the southern end of the town. It serves as the home of Link and Niko.

Link lives within a small house in Aboda Village alongside his roommate, Niko. The game begins inside of Link's house, where Niko is telling Link the Story of the Spirit War and the history of the land.

The interior of their house has a small table, a fireplace, a pair of beds, and other items scattered about. Many of the objects relate to The Wind Waker, including a picture of Niko when he was younger, as well as a small model of a Pirate Ship, and a Telescope. Additionally, the Ship Parts found in the home are a reference to Phantom Hourglass.

Alfonzo lives in the north of Aboda, next to the train station. He will attach a new train part to Link's train if asked.

The majority of the population of Aboda Village belongs to a single family. Consisting of the Father and Mother, along with their son Joe and their daughter Rei. They reside in the home at the southeast part of the village. Early on in the quest, Joe and Rei will teach Link some of the basic game mechanics and will reward him with Rupees and a Treasure piece.

The Father can be found just north of Link's house, standing next to a Cucco Pen. Early in the game, he mentions his desire to someday raise a bunch of cuccos. The man will ask Link to bring him Cuccos in his Train once Link has acquired a Freight Car. Link can find Cuccos for sale in Hyrule Castle Town and if he brings them to the Father in Aboda, he will receive a Force Gem.

The Stamp Station is north of Link's House, just near Alfonzo's House. Link can get the Stamp for Aboda Village in his Stamp Book here.

There is a beehive in a tree just outside of Alfonzo's House. Link can roll into the beehive, causing bees to chase after him. Link can get away from the bees by jumping into the water or by entering a house.

There are two palm trees in the town and they will reveal Treasure Chests if the Song of Discovery is played near them.