From Zelda Dungeon Wiki
Jump to navigation Jump to search
Want an adless experience? Log in or Create an account.
Disorientation Station 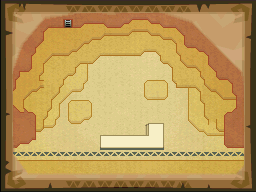 The Disorientation Station is located in the remote northeastern quadrant of the Fire Realm in Spirit Tracks.

Link must traverse the maze within the island's cave to find the friend of a meandering soldier. The soldier abandoned his friend while they were searching for a "golden treasure".[1][2][3] The soldier tells Link that he can keep the treasure as long as his friend returns safely.[4] The soldier's friend is found to be dead upon Link reading a tablet confirming his demise, in which he apologizes to the soldier for attempting to keep the golden treasure all to himself, and urges the soldier not to worry about him and move on with his life.[5] The reward for navigating the maze is an Alchemy Stone. If Link does not read the stone tablet, the soldier continues searching for his compatriot.[6] If Link reads the tablet and tells the soldier of what he read, the soldier becomes relieved that his friend isn't angry, and awards Link with a small treasure for helping.[7]

The station is arranged as a 3x3 puzzle. Upon entering, go north twice, east once, then north twice again. Once you do, go to the lone tile in the room and play the Song of Discovery. This will unveil the Alchemy Stone (Priceless Stone if playing the pal version.[8]).