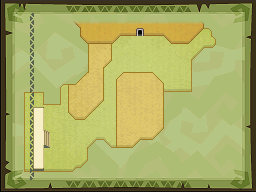 The Pirate Hideout is a train station found in Spirit Tracks. It is located in the Ocean Realm. When first played, Link rescues a prisoner from Papuchia Village, During the return visit, it is a Goron who must be saved.

Access to the location is granted after delivering Mega Ice to Papuchia Village. It is home to a mini game hosted by a Goron which leads to various rewards. The first portion is in a jail, the second on a mine cart. Moblin are fought with one Big Blin at the end. If between 3000 and 4000 points are earned, the Quiver is obtained. A score of over 4000 points earns a Heart Container.

Using the Bow of Light with its Light Arrows earns ten extra points per Moblin kill.

The Stamp Station is obtainable through playing the Song of Birds on the Spirit Flute.