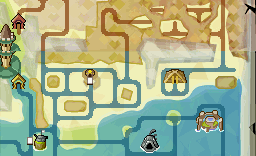 The Sand Realm is one of the regions from Spirit Tracks. Unlike the other four main realms, it is spread across two of them and it does not have its own Rail Map. Most of the Sand Realm's stations are in the northern Ocean Realm, although it does extend into part of the Fire Realm. Rael is the Realm's only inhabitant.

The Sand Realm is a large desert, primarily inhabited by Malgyorgs. There are also four stone statues who gazes all meet into a singular point.

There are only two stations in the Sand Realm: the Sand Sanctuary and the Sand Temple. They are both found in the Ocean Realm. However, the Ends of the Earth Station appears to be in a sand biome as well, even though it is much farther north than the rest of the realm, inside of the Fire Realm rather than the Ocean.

At first, the Sand Sanctuary is the only available location to go to, although there appears to be nothing but a few stone tablets and some strange paths running throughout the area. The tablets describe a riddle in which Link must find the four stone statues around the entire Sand Realm out on his train and figure out the spot where their gazes meet. Then, back in the Sand Sanctuary, where the paths are actually smaller versions of the tracks, he can find that spot and use a Bomb to enter the Sanctuary.

Link then can play a Lokomo Song on the Spirit Flute with the Lokomo sage, Rael. The tracks will spread into the Fire Realm, where Link must pass three tasks in order to enter the Sand Realm.

After Link passes these tests and obtains the Sand Wand and Bow of Light within the Sand Temple, he can go to the Tower of Spirits to locate Malladus.

Ten Desert Bunnies are found here, who can be taken to Rabbitland Rescue for a reward. In addition, Link can bring Rael five Cuccos from Castle Town for a Force Gem. He can then use these Cuccos to reach the Sand Sanctuary's Stamp Station.