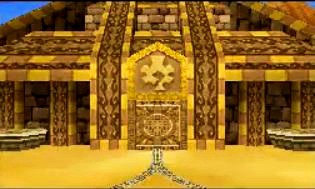 The Sand Temple (Desert Temple in the European version) is the fifth Dungeon in Spirit Tracks. Anjean states the temple will test all of Link's skills and if he triumphs, the Bow of Light awaits him.[1] It is located in Sand Realm regions of the Ocean Realm. The dungeon item is the Sand Wand, and the boss is Skeldritch.

In the final chamber, Skeldritch appears at first as an inanimate skull in the center of a sandy arena, but it soon awakens and rises out of the sand, revealing its long spine. This spine is vulnerable in certain areas, and Link must return a barrage of boulders to destroy its segments. In addition to the boulders, Skeldritch defends itself during this portion of the battle by firing lasers from its eyes.

Once the spine is completely destroyed and Skeldritch is reduced to a skull, it will move around freely in a desperate attempt to defeat Link. The top of its cranium is vulnerable and can be reached by elevating the sand surrounding the boss.