From Zelda Dungeon Wiki
Jump to navigation Jump to search
Want an adless experience? Log in or Create an account.
Cucco 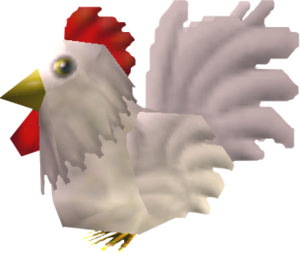 Cuccos are recurring animals in The Legend of Zelda series. They are similar to chickens and sound like a rooster. In most games, Cuccos can summon a flock of Cuccos to attack Link if he has hit them too many times.

Cuccos appear in a wide variety of areas in A Link to the Past. Swiping them with a sword repeatedly will cause them to flock and attack Link.

Dark World cuccos exist only as skeletal, stal forms; but behave the same as their fleshy Light World counterparts.

A Link to the Past (GBA)

"Cock-a-doodle-doo! What is it? Go find it and catch it with your bug- catching net!"

"Cucco" is the answer to Q. Bumpkin's first riddle in his Riddle Quest, and Link must catch one with the Bug-Catching Net and bring one to him in his basket to answer it.

Doing so will lead Bumpkin to send a Wooden Carving of a cucco to Link's House. Sprinking magic powder on it will sequentially make it sparkle, turn it into a colour version, and turn it into a Bone Cucco.

Cuccos in Link's Awakening appear in Mabe Village and the Hen House. The Henhouse Keeper takes care of many Cuccos at his home, but he dreams of meeting one that can fly.[1] When Link awakens the Flying Rooster, the Henhouse Keeper's dream comes true.[2] Unlike in other games, Link can actually kill the Cuccos in Link's Awakening by sprinkling them with Magic Powder, which causes them to burst into flames. The Magic Rod can create the same effect.

If Link hits a Cucco with the sword 35 times, a swarm of Cuccos will attack him until he leaves the area or dies. 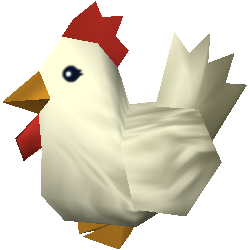 In Ocarina of Time, Cuccos can be used to float gently down to certain places. They are used to obtain many Heart Pieces and even a Bottle. However, if hit by the sword one too many times, the Cucco will "cockadoodledoo" and a massive swarm of aggressive Cuccos appear. They continuously attack Link and cannot be defeated. The best way to escape is to quickly enter a building.

The Cucco Lady in Kakariko Village takes care of many Cuccos. When they escape, she asks Link to gather them all back up for her in a pen.[3] Once Link returns them, she explains that she is allergic to them and then gives him a Bottle.[4]

In addition, a Cucco is used to awaken Talon so that Link can enter Hyrule Castle. After that, Talon can be found at Lon Lon Ranch where he allows Link to search for "Super Cuccos" for 10 Rupees.[5] If Link finds them all, Talon gives him a bottle filled with Lon Lon Milk. Note that Link can cheat at this game by throwing all the Cuccos into the corner behind Talon before the mini game starts, making the mini game incredibly easy. [6]

The Pocket Cucco and a blue Cucco named Cojiro are also a part of the Trading Sequence.

Cuccos in Majora's Mask are identical to the ones in Ocarina of Time. They appear in the Cucco Shack of Romani Ranch, where Grog watches over them. When Link first arrives, they are still tiny chicks, and Grog is disappointed that he will not see them full grown.[7] By marching around with the Bremen Mask the chicks will follow Link and turn into full grown Cuccos. Grog thanks him with the Bunny Hood.[8]

In the Oracle games, Cuccos are very similar to the ones in Link's Awakening. The Flying Cucco, who resembles the Flying Rooster, can be found in Oracle of Seasons.

Cuccos appear in some stages of Four Swords Adventures, mostly in towns.

The Cucco Wranglers is also a mini-game found in this game in Tingle's Tower. Like in Ocarina of Time, the Links must catch Cuccos and toss them in a pen and the Link to catch the most wins a Force Fairy, given by Tingle.

Anju appears again in The Minish Cap with a flock of Cuccos that manage to escape into Hyrule Town. Every time Link plays, the game becomes more difficult.

Cuccos can be used for the same reasons as in Ocarina of Time. In Falbi's Flight-by-Fowl, Link jumps from high above Lake Hylia while holding a Cucco to gently float down to the Isle of Riches.[9][10] Rusl also gives Link the Golden Cucco in order to get into the Sacred Grove as a human.[11]

Due to his wolf form, Link can speak with any of the Cuccos. The Cucco Leader in the Hidden Village allows Link to play a game to search for cats.[12][13]

Cuccos behave differently than in other games when attacked. Rather than swarming around him, if Link hits a Cucco enough with the sword, he can take control of it for a short while.

The Cuccos of Phantom Hourglass are found on a variety of islands in the World of the Ocean King, such as Mercay and Molida. They will support Link's weight if he jumps off a ledge while holding them, which can help him reach Treasure Chests. Similar to other games, a swarm of Cuccos for 15 seconds will attack if struck 5 times.

Cuccos can be found in Castle Town, where a man is selling them for 50 Rupees for five birds.[14] He can carry them in his Freight Car. While transporting them, Cuccos will run away if the train is attacked.[15] Both Rael, the Lokomo at the Sand Sanctuary and a man from Aboda Village want Cuccos delivered to them. The man in Aboda wants to raise them and asks for ten total, forcing Link to take two trips due to the fact that he can only carry five.[16] Rael wants five.[17] By giving them their Cuccos, both men will give Link a Force Gem. Link can also use one of the Cuccos in the Sand Sanctuary to reach the Stamp Station there after delivering them.

Cuccos can be found most often in Kakariko Village. South of Kakariko there is also a mini-game known as Cucco Ranch that has a goal to avoid Cuccos for 30 seconds or more. The reward on the "Rooster" level is a Piece of Heart. In addition, there is one Treasure Hunter Cave that requires Link to use the Cuccos to float gently down on top of a Silver Rupee. Lorule also has its own version of Cuccos that are darker in color. 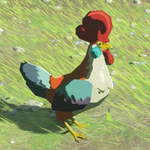 Picture of the Cucco entry (#47) in the Hyrule Compendium.

"Villages often raise these birds for their eggs, but some people actually keep them as pets. They can't fly, but can flap their wings mighty furiously if picked up. They're usually calm creatures, but if you're persistent in your torment of them... Well..."

— Entry in the Hyrule Compendium

In Breath of the Wild, Cuccos are mostly found in Kakariko Village and in some stables across Hyrule. In Kakariko Village, there is a Side Quest called Flown the Coop. In this side quest, you must help find Cado's missing Cuccos. For completing this Side Quest, you are given a Purple Rupee. This quest is one of the 3 prerequisites for The Stolen Heirloom Shrine Quest to uncover Lakna Rokee Shrine.

Cuccos will also attack you if repeatedly struck, but can attack monsters if hit by a monster. If Link jumps from a ledge carrying one, he can glide at the same stamina consumption rate as that of the paraglider.

Cuccos may drop Bird Eggs when struck, but unlike other birds, they do not drop bird parts. Like most domesticated animals in the game, Cuccos cannot be killed, although throwing them into water seems to make them disappear, which is most likely the closest thing to killing a Cucco in the game. They are also the smallest domesticated animals in the game, being also the only ones of those who freely roam inside towns and settlements.

Cuccos are neutral units which can be found periodically throughout the game on levels with no rogue forces. Often one Cucco will be standing around, minding its own business. If a player attacks one, it becomes enraged, and wave after wave of cuccos show up in retaliation. Cuccos also appear as allies in certain Adventure mode missions with Linkle as the warrior. Players can also meet Golden Cuccos, solid gold variants that have much more health and are harder to defeat. Cuccos also appear in Lana's Summoning Gate moveset's special attack.

On March 24, 2014, Masahiro Sakurai posted a picture on the Super Smash Bros. website of a new item, the Cucco. This is what Sakurai had to say about the Cucco species:

"Pic of the day. Never bully Cuccos. Seriously, attacking them is out of the question! This has always been a cardinal rule of The Legend of Zelda series."

In the game, the Cucco item, when thrown at an opponent, summons a horde of Cuccos to attack all opponents. This refers to the way Cuccos respond when agitated in the many of the main series games. In the 3DS version's Smash Run, the 16-bit Cucco from A Link to the Past appears as an enemy and also summons other Cuccos if hit.

In Sonic Lost World's "The Legend of Zelda Zone," released March 27th, 2014, there are three Cuccos found in a fenced area in the level's version of Hyrule Field. If Sonic (dressed up as Link in this free DLC) attacks them a few times, they use their signature attack and call numerous other Cuccos, all attacking Sonic.