From Zelda Dungeon Wiki
Jump to navigation Jump to search
Want an adless experience? Log in or Create an account.
Mabe Village 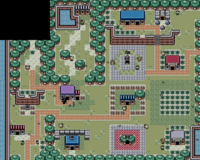 Mabe Village is located on Koholint Island, the setting for Link's Awakening. It is one of two places on the island with settlements, the second being Animal Village in the east, which is its sister city.[1] It is in close proximity with the Mysterious Forest, South of the Village, and Ukuku Prairie.

Only a small number of human characters live outside Mabe Village, such as Mr. Write, Crazy Tracy and Richard. The residents of Mabe Village are:

One of the many Telephone Booths of the island can be found in the south of town, near Ulrira's house. These booths allow Link to call Ulrira to get information on where to head next in his quest.

The Dream Shrine can be found in the northeast of town, near one of the Island Quadruplets and next to Papahl's house. It can be accessed after obtaining the Power Bracelet, but Link can only receive the prize at the end, the ocarina, if he has the Pegasus Boots.

The Mabe Village Library is located in the southwest, near the entrance to the South of the Village region. Inside, Link can find many books, including ones that will lead him through the Wind Fish's Egg and the directions to the Color Dungeon.

The Fishing Pond is north of the village, past Madam MeowMeow's house. Here, Link can pay the Fisherman 10 Rupees to fish here.[2] Link has the chance of getting a Piece of Heart.

The Trendy Game is found in the southeast of town. It is a mini-game where Link can win many prizes by operating a large crane. It costs ten rupees to play.[3] Link can win the Yoshi Doll here to give to Mamasha and begin the Link's Awakening Trading Sequence.

A weathercock depicting the Flying Rooster is found near the center of town. Marin likes to stand near here and sing. After getting the upgraded Power Bracelet, Link can enter the statue and find the resting place of the rooster. If Link plays the Frog's Song of Soul, the Flying Rooster will come back to life.