From Zelda Dungeon Wiki
Jump to navigation Jump to search
Want an adless experience? Log in or Create an account.
Kanalet Castle 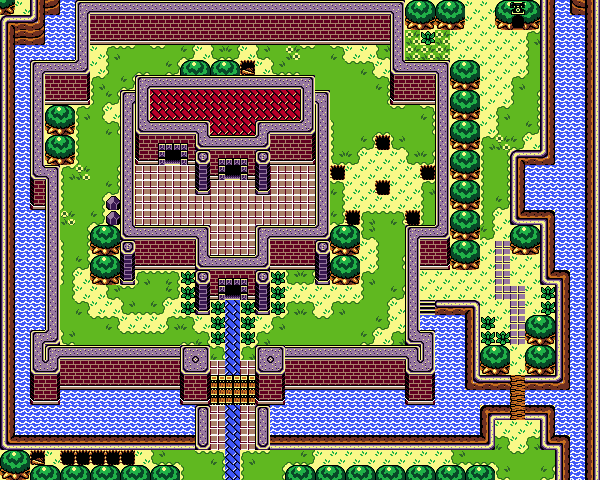 Kanalet Castle is a mini-dungeon in Link's Awakening where Link must find five Golden Leaves. It is the former home of Richard.[1]

When Link first meets Richard, he claims that he used to live in Kanalet Castle, but his servants went berserk and he fled to his villa.[1] He asks Link to collect the five Golden Leaves that he left behind there.[2] After doing so, Richard will let Link through a secret passage in his house to acquire the key to Key Cavern.[3]

The Kanalet Castle gate is originally closed, so in order to access the castle Link must give Kiki the Monkey some Bananas, which are part of the Trading Sequence.[4] Kiki then calls other monkeys to create a bridge that allows Link to enter the castle through an underground passage.[5]

In the DX version of the game, Link can take a photograph outside of Kanalet Castle. If he walks up to the gate, he will be greeted by the Photographer, who is interested in taking a picture of the old castle.[6]. Richard then joins him and says he believes that their courage in retrieving the Golden Leaves deserves a photo.[7][8] This photograph is unavailable after Link opens the castle gate by pressing a switch inside.

There are very few enemies in Kanalet Castle. However, it is notable as hosting the only Mad Bomber in the game, who guards one of the Golden Leaves.