From Zelda Dungeon Wiki
Jump to navigation Jump to search
Want an adless experience? Log in or Create an account.
Monkey 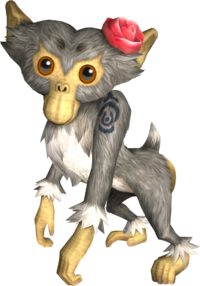 Monkeys appear a few times in The Legend of Zelda series, most notably in Majora's Mask and Twilight Princess.

There is one monkey in A Link to the Past, Kiki. He opens the way for Link to get into the Dark Palace, but only when Link pays 100 Rupees.

There are only two monkeys on Koholint Island; one of them Link has to watch out for, and it is sitting at the top of a tree near the south-western beach. This monkey will throw coconuts and bombs at Link as he tries to pass by or go near the tree. Simply running past will be good enough to dodge his attacks. Link can knock it out of its tree by dashing into it with the Pegasus Boots. When BowWow is following Link around, the dog can eat this pesky monkey.

The other monkey is named Kiki, and is the same one from A Link to the Past. Kiki can be found right by Kanalet Castle. If Link gives the monkey the Bananas, he creates a bridge allowing Link to get to the castle. The monkey also leaves behind the Stick, another item in the trading sequence.

Monkeys appear when Link tries to clear the Southern Swamp of poisonous waters. The monkeys tells Link that the Deku King captured a monkey and accused him of kidnapping his daughter. Once Link manages to navigate through the courtyard of the Deku Palace, he teaches Link the Sonata of Awakening, which is used to access the Woodfall Temple.

A handful of monkeys make an appearance in the Forest of Time in Oracle of Ages. After Veran manages to possess Nayru, she begins to alter the flow of time, causing the majority of these monkeys to vanish. This is due to the disruption of the flow of time which causes them to become non-existent. However, later in the game, the proper flow of time is restored, and they are brought back into being.

Monkeys in Twilight Princess live in the Faron Woods. Some of the monkeys also bother the people of Ordon Village by stealing from them. In the Forest Temple, Link must free all the monkeys to get to the boss of the dungeon.