From Zelda Dungeon Wiki
Jump to navigation Jump to search
Want an adless experience? Log in or Create an account.
Stone Statue 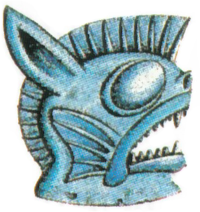 Stone Statues are recurring enemies in The Legend of Zelda series. They shoot deadly fireballs, similarly to Beamos in later games.

Stone Statues are at the entrance of every dungeon. Sometimes, they act as enemies and shoot fireballs at Link.

Stone Statues appear in forms of dragon heads in various colors. They will continue to shoot fireballs at Link until he is out of range.

In A Link to the Past, there are similar Stone Statues referred to as Medusa. This enemy is first encountered in the Dark Palace and is a variation of the Stone Statue.

These statue heads move in a circular form and will shoot fireballs towards Zelda. There are only two of them that appear in the entire game and they are in the same room within Reesong Palace. The first statue can be defeated with a number of sword slashes, but it gives off no reward and will immediately re-spawn. Thus, there is very little reason to take the time to defeat them. Since they appear with a number of other enemies in the same room, it is best to try to quickly maneuver through the room, avoiding their fireballs.