From Zelda Dungeon Wiki
Jump to navigation Jump to search
Want an adless experience? Log in or Create an account.
Tektite 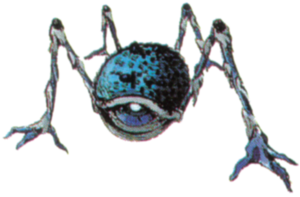 Tektites are recurring enemies in The Legend of Zelda series. Their appearance is very similar to that of a spider.[1] Tektites jump around quite a bit,[1] and deal damage if they come in contact with Link. Tektites generally appear in the Overworld, but in recent titles, such as Twilight Princess, they have appeared in dungeons as well. They have appeared in every game except for The Wind Waker, Skyward Sword, and Breath of the Wild.

Tektites make their debut appearance in The Legend of Zelda. They are spider-like creatures that jump around randomly[1] in the Overworld and attempt to jump into Link. Tektites are common on Death Mountain and in areas of the eastern coastline. Tektites can be difficult to defeat because they jump out of the way when Link tries to attack them with the Sword. They can be defeated by using the Sword, Bombs, Magical Rod, Bow, Arrow, and Candle. Link also can stun the Tektites with the Magical Boomerang.

Tektites come in two varieties in this game, red and blue. The red Tektites jump around more than the blue ones,[2] However, they both have little attacking power,[3] and can be defeated with a single hit from the original Sword. Once defeated, Tektites commonly drop Rupees and Clocks.

Tektites in The Adventure of Link are considerably more difficult than the ones from The Legend of Zelda. In order to defeat them, Link must use the Fire Spell and attack them with fireballs, or use the Thunder Spell. They will jump above Link and try to fall on him to cause damage. They also spit rocks.

Tektites are common in the Tal Tal Mountain Range and Northern Koholint Island. Their appearance in this game looks generally square compared to other versions of Tektites. When they are on the ground, they will usually remain still for a few seconds before jumping again. While they are not moving, Link can either shoot them with an arrow from a distance, or quickly walk up and slice at them with the Sword. Water Tektites also appear often in water areas, such as Catfish's Maw.

In Ocarina of Time, Tektites come in red and blue variations.

The red variation is found on Death Mountain. Their only attack is to jump at Link. To defeat them, Link can use the Megaton Hammer to make a shockwave and flip them over, and the Hookshot or Longshot have the ability to stun them. This makes it easier for Link to attack with the Sword.

The Blue Tektites can be found at Lake Hylia, Zora's River, and in the Water Temple. Unlike the red variety, they can float on water. Though they are the same speed, the blue variation is also more durable than the red. Otherwise, they are identical in behavior to the Red Tektites.

In the Oracle series, Tektites come in orange and blue variations. Blue Tektites are just like their counterparts, the Orange Tektites. The only different is Blue Tektites have better defense. To defeat these enemies, evade their jump and allow them to land and then run up for a quick strike. It is sometimes hard to land in both strikes without another Tektite hitting Link, as they tend to be in groups of both blue and orange Tektites.

Tektites in Four Swords look much different than in prior installments. They have pointed gray bodies, with a red horn on top. They stop at nothing to try and harm the four Links on Death Mountain.

Tektites can be found on Death Mountain, in The Desert of Doubt, and in the Realm of the Heavens. They come in red and blue variations. The blue ones are more powerful and move quicker than the red ones. Both red and blue Tektites can be defeated with a few sword slashes.

Like in previous games, Tektites jump around randomly and their only attack is simply jumping into Link. Use the Boomerang to stun them or simply try to strike them with Link's Sword. Tektites come in three variations in this game; red, blue and gold. Red Tektites move around slowly and weaker. Blue Tektites move much faster and require more strikes to defeat. Red and Blue Tektites appear in Mt. Crenel.

The third variety, the Golden Tektite is much stronger, much quicker, and jumps higher than other Tektites. It can only be found by fusing Kinstones. Link is rewarded with 100 Rupees after defeating the golden Tektite.

Tektites again appear in both red and blue variations. Tektites are found in the volcano at the middle of the Isle of Ember and Doylan's Pyramid. The red variation is faster and more powerful than the blue type.

In Spirit Tracks, Tektites are much larger and are found when Link travels through the tunnels that connect the various locations. They climb on the ceiling and walls of the caves and attempt to drop on the Spirit Train. To defeat them, Link must fire the Cannon attached to the Spirit Train at the Tektite. The third Rocktite Link encounters summons Tektites. It is hinted that Tektites become Rocktites by Zelda[citation needed].

Tektites appear in A Link Between Worlds, and are found on Death Mountain as well as the Eastern Palace Grounds. They retain many of the similar characteristics from previous installments, including featuring red and blue varieties, having the ability to jump over Link, etc.

Tektites have a much different appearance in Battle Quest. They still have the characteristic four legs, one eye, and habit of jumping, but the method to defeat these enemies more closely resembles that of Sentrobes. Swordsmen must use precision sword strikes to slash through the small openings in their armored shells. Archers can simply strike the eye with one normal shot to defeat one. Like other enemies in Battle Quest, a charged shot with the Hero's Bow can pierce through several Tektites if they are lined up behind each other.

Red Tektites appear in the Extra stages. They do not have gaps in their shell.