From Zelda Dungeon Wiki
Jump to navigation Jump to search
Want an adless experience? Log in or Create an account.
Aeralfos 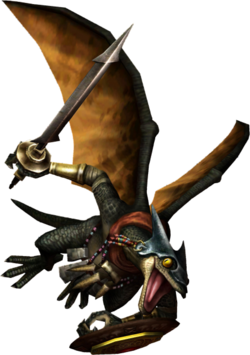 Aeralfos are enemies from Twilight Princess and Tri Force Heroes. They are part of the same family as the Lizalfos and Dynalfos except they can fly.

Aeralfos first appear as the mini-boss of the City in the Sky, and later as a regular enemy in the Cave of Ordeals and Hyrule Castle.

Look closely at the Aeralfos and its shield is actually a Clawshot target. Once it is ready to attack, it will hold its sword back and shield forward. Link can then use the Clawshot and pull the Aeralfos closer. Strike at it with several sword slashes and it'll regain its footing. After a short while, it'll return to the air.

After this, the Aeralfos will fly around and leave through one of the windows in the room. This phase is nearly identical to the first phase, except the Aeralfos will fly in and out through the four windows in the room. It also floats a bit higher, which means Link cannot always Z-target it, so the Clawshot needs to be aimed a bit higher if it is too high.

Defeating the first Aeralfos allows Link to obtain a second addition to his original Clawshot; making them the Double Clawshots. 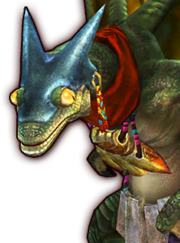 Aeralfos are Captain-level enemies in Hyrule Warriors. They are vulnerable to the Hookshot, and drop Aeralfos Leather (bronze) and Round Aeralfos Shields (silver) materials.