From Zelda Dungeon Wiki
Jump to navigation Jump to search
Want an adless experience? Log in or Create an account.
Darkhammer 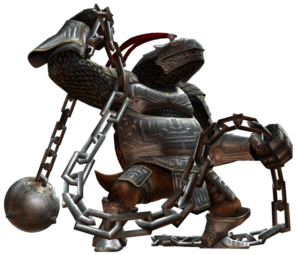 Darkhammer is one of the Mini-Bosses in Twilight Princess. It can be found in the fifth dungeon, the Snowpeak Ruins.

At first it will act like a statue, so Link won't know it is a mini-boss. When Link comes close to the door on the other end of the room, Darkhammer will destroy the other statue and the doors will be locked.

The ceiling of the corridor is a target table, hence, Link can use his Clawshot on the ceiling behind him, causing Darkhammer to turn around and throw his Ball and Chain at him. This is easily avoidable by just walking out of the way. Darkhammer will stand there for a few seconds before pulling back his ball. This is Link's chance to walk towards him and slash away on his tail. This is pretty much all Link needs to do, and can do. Link can also use his Bow at his tail if he is afraid to walk to him, but it will cost a lot of Arrows.

The dungeon item Link acquires after defeating this boss is the Ball and Chain itself, which is the only part of Darkhammer that doesn't explode after he is defeated.