This article is about the corrupted form of Darbus. For the Goron form, see Darbus. 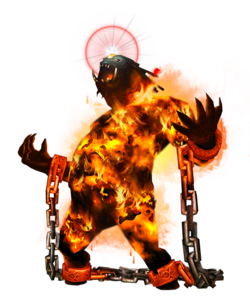 Twilit Igniter: Fyrus, more simply known as Fyrus, is the Boss of the Goron Mines. He was once Darbus, the Goron Patriarch, but was corrupted by the Fused Shadow.[1] Once Fyrus is defeated, he returns to his form as Darbus, and Link obtains the second Fused Shadow.

Shooting an arrow at Fyrus

Attacking the jewel on Fyrus's head

The shiny red eye on the head of Fyrus is the weak spot. Link is not able to Z-target Fyrus because of its humungous size. Instead, keep your distance and manually aim an arrow at the red eye on Fyrus's head. Once you hit him, Fyrus will be stunned for a moment so quickly run behind him and grab the chains that are attached to his legs. Equip the iron boots and then pull back on the chain. It will tighten and then send Fyrus crashing to the floor. Now run to the head of Fyrus and you can now Z-target him. Slash away with your sword, dealing as many shots as possible until Fyrus gets back up on his feet.

Fyrus has a few attacks, one of which is tossing his shackles towards Link. Additionally, he'll contract air and release a fire burst in all directions that is quite damaging. The best way to avoid these attacks is simply to stay on attack. He simply is to slow and you have plenty of chances to hit him before he can even attack. Three knock downs of Fyrus, followed by sword swipes should finish him off.

After vanquishing the power of the Fused Shadow, Darbus's Goron form is restored but he has no recollection of what occurred.[2][3][4]