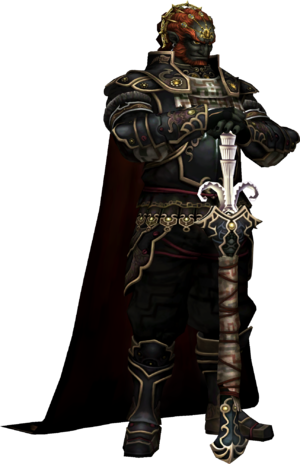 Ganondorf is the final Boss that is encountered in Twilight Princess. He was the power behind Zant, and the one who has caused trouble throughout Hyrule. The fight is in four phases: Ganon's Puppet Zelda, Dark Beast Ganon, on Horseback, and Dark Lord Ganondorf.

Ganon's Puppet ZELDA will float around in the air and unleash three types of attacks at Link. The first is a simple sword dash towards Link, which can be easily blocked with the shield. When she hits you though, you will lose your ability to Z-target her for a second. Puppet Zelda will also summon a giant golden triangle on the ground. If Link is standing in the area that is affected, he will lose health.

Puppet Zelda's most common attack is when she will hold her sword in the air and summon a ball of light. She will then send this ball towards Link, beginning a game of Dead Man's Volley. Slash at the ball and it will move back towards Puppet Zelda. She will deflect it back towards you. Keep deflecting the ball back and forth and it will eventually hit Puppet Zelda. Be careful as the ball moves faster and faster each time it his hit back towards Link. Repeat this same process until you've hit Puppet Zelda three times with the golden ball. Midna will then use the power of the Fused Shadow to banish Ganon from Princess Zelda's body.

Ganondorf next uses his power to transform into the Dark Beast GANON.

The weak spot of Ganon is the shining silver scar that is on Ganon's belly. The battle will begin with Ganon running around the room, knocking down all the pillars that are in the way. Ganon will then disappear into a portal. Several red portals appear, but one of them eventually turns blue and Ganon will come running out of it. Once Ganon enters a portal, keep your back against the nearest wall and pull out the bow and arrow. When portals start appearing close to each other and there is a pulsing sound, Ganon is coming out. Once he appears, nail him with an arrow right in the forehead. He will be stunned so run on over and slash away at his scarred silver belly.

When Ganon is hit he will sometimes come out of a portal from above Link and land directly on you. Just quickly try to roll around to avoid him landing on you. Just repeat this process a few times and Ganon will catch on. Now, Ganon will jump into the air when you attempt to hit him with an arrow. Switch to Wolf form, and wait for him to come out of a portal. When he comes close, press and HOLD the A button, causing a fight of power to start with Ganon. Throw him over to a side and from here you can attack his weak spot until he's finally defeated.

Next we see, Princess Zelda and Link are somewhere in Hyrule Field and Ganondorf appears, carrying the Fused Shadow that Midna wore on her head. Ganondorf summons an army and gallops towards Link and Zelda on his horse.

Princess Zelda then summons the four Spirits of Light. After a short scene, Link and Zelda are both on top of Epona. Zelda will try to slow Ganondorf down with Light Arrows from her Twilight Bow.

The battle begins with Ganondorf and it has a very similar feel to the first battle with King Bulbin. Ride around the field with Epona and try to stick as close to Ganondorf as possible. Z-target Ganondorf when you are close enough and Princess Zelda will shoot a light arrow. Once she hits Ganondorf he will be stunned. Quickly get over to where he is and slash away with the master sword.

Just keep following after Ganondorf, Z-targeting him so Zelda can stun him with a Light Arrow. After several hits, Ganondorf will fall off his horse onto the ground below. He will then get up and begin mocking Link with a laugh. He calls it an impressive looking sword, but nothing more. Ganondorf then pulls out his own blade and a barrier surrounds Link and Ganondorf. The final battle then begins with the Dark Lord GANONDORF.

The battle is a classic sword fight. Don't bother trying to use the shield attack as it will only hurt you. The back slice is the best method for attack Ganondorf as he simply doesn't block it very well. Once you connect with a back slice, slash repeatedly at Ganondorf until he blocks one of your attacks.

Ganondorf will do a variety of sword attacks, all of which can be easily avoided or blocked. Once of his attacks is a massive sword slash at Link. The A button will pop up with 'Chance' written on it. Press A and your swords will collide with each other. Press A repeatedly and Ganondorf will be pushed away and become vulnerable for a few seconds. Slash away with your sword a few times until he blocks your attack.

Just keep using the back slice to hit him. Back slice to your left (on the Wii version), because Ganondorf is left handed and that will keep you further away from his sword. Another very awkward but effective strategy involves the fishing rod. Toss the fishing rod and Ganondorf will look at it confused for a second. Then quickly slash at him with your sword and you should be able to hit him from the front. Once he has been knocked down, target him and finish him with a final blow.