From Zelda Dungeon Wiki
Jump to navigation Jump to search
Want an adless experience? Log in or Create an account.
Iron Boots 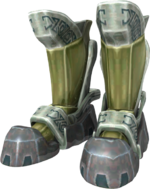 The Iron Boots from Twilight Princess
In Other Languages[show][hide]

The Iron Boots are a recurring item in The Legend of Zelda series. When equipped, the Iron Boots greatly increase the weight of Link, allowing him to sink to the bottom of lakes, push down rusty switches, stick to metallic surfaces, and more. The Iron Boots are one of many equippable footwear in the series, including the Hover Boots, Kokiri Boots, Pegasus Boots, and the Boots.

The Iron Boots are located within the Ice Cavern, where they are guarded by a White Wolfos. The boots can be used to walk around underwater, which is necessary in order to enter the Water Temple in Lake Hylia.[1] They can also be used to withstand the winds from fans found inside the Shadow Temple and Ganon's Castle.

In Ocarina of Time 3D, the Iron Boots are made an equippable item rather than appearing on the Equipment subscreen like Link's tunics. This was done to appease complaints about having to constantly pause the game to equip and remove them in the original game.

After sailing to the Ice Ring Isle one square west of Forest Haven, Link can thaw the entrance with the Fire Arrow and follow the ice-covered path inside. At the end of the chamber is a treasure chest containing the Iron Boots.[2] The main purpose of the Iron Boots in this game is to stand in the face of fierce winds, as is required to enter and complete the Wind Temple, and they can also be used to press down springboards and weighted switches. Their underwater functionality from Ocarina of Time has been removed entirely, however; like most items, Link is unable to equip them while swimming.

The Wind Waker was the first game to include the boots as an item rather than a piece of equipment, which would be carried on through the rest of their appearances in future games.

In Twilight Princess, Link is given the Iron Boots from Mayor Bo of Ordon Village after being taught the art of sumo. The boots are the only things that will enable Link to stand against the great strength of the Gorons, and thus are required to climb Death Mountain and access the Goron Mines.[3]

In addition to their functioning against strong winds and while underwater, as in Ocarina of Time, the Iron Boots can also be used to walk on magnetic walls and ceilings and to activate special switches when used with the Clawshot. They are necessary in order to defeat several bosses in the game, including Fyrus, Morpheel, Argorok, and Zant.