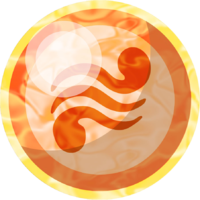 Din's Pearl is the first Goddess Pearl collected in The Wind Waker. It is the first of the three pearls found in the game and named after the Goddess of Power.

Link heads to Dragon Roost Island in search of Valoo, hoping that the dragon can give him Din's Pearl.[1] When Link arrives, Prince Komali has it and refuses to give it up.[2] He tells Link that his grandmother gave it to him and that it makes him feel safe.[3] However, after Link completes Dragon Roost Cavern, Komali thanks Link and admits that he wants to be like him someday.[4] He gives him the pearl, claiming that giving him what he values most will someday give him courage.[5]

Din's Pearl, along with Farore and Nayru's Pearls, unlocks the way to the Tower of the Gods after it is it in the arms of a statue on Northern Triangle Island.[6]