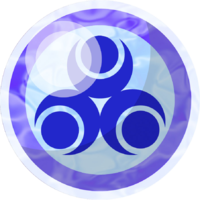 Nayru's Pearl is the third and final Goddess Pearl collected in The Wind Waker. It is blue in appearance and bears the familiar symbol of Nayru.

Upon discovering that Ganon's influence has spread to Forest Haven, the King of Red Lions urges Link to sail to Greatfish Isle, where the next pearl lies in possession of the spirit, Jabun.[1] Unfortunately, once they arrive, they find the island in a destroyed state, with Jabun nowhere to be seen.[2]

Quill then appears, explaining that although Jabun is no longer at Greatfish Isle, he managed to escape the destruction and head to Outset Island, Link's home.[3] However, Jabun is hidden behind a stone wall to protect him.[4] Quill then admits that he told the pirates about Jabun's hiding place, but luckily they were unable to break the barrier.[5] According to him, the pirates were last seen on Windfall Island.[6] The King of Red Lions agrees that they should head there, but asks Link not to confront the pirates directly.[7][8]

Link sneaks into the Bomb Shop on Windfall Island in hopes of overhearing the pirates' plan. They reveal that they will use Bombs to break down Jabun's seal.[9] Tetra initially wants to set sail to Outset immediately, but at her pirates' protests she decides to give Link a chance and allows them to spend the night in the Cafe Bar.[10][11][12] Gonzo then reiterates the password to the ship to Mako.[13][14]

Using this password, Link can sneak onto the Pirate Ship and finds Niko there. He sets up another test for Link, in which he must jump across platforms to reach the other side.[15] Once Link makes it to the other side, Niko reluctantly gives him their bombs.[16]

Link heads for Outset Island and breaks down the stone wall concealing Jabun's hiding place using the bombs. After a brief conversation with the King of Red Lions, Jabun gives him Nayru's Pearl.[17]

Now that Link has all three pearls, he must place each in their respective statue on the three Triangle Islands to reveal the Tower of the Gods.