The Hero's Clothes is the name for green garments that appear in The Wind Waker and Twilight Princess. It has passed through generations and is destined to be worn by the hero chosen by the Goddesses. 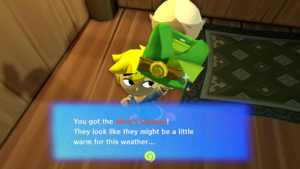 Link receiving the Hero's Clothes in The Wind Waker HD

Link receives the Hero's Clothes from his grandmother at the start of the game. The clothes are initially only meant to celebrate his coming of age and to honor the feats of the legendary Hero of Time, as is tradition on Outset Island. However, after Link's sister Aryll is kidnapped by the Helmaroc King, he continues to wear the clothes as he embarks on a journey across the Great Sea to rescue her. Owing to their antiquated style, the clothes are often regarded as appearing strange or old-fashioned by various characters throughout the game.

During the Second Quest, Link is given an alternate set of clothing called the Hero's New Clothes, which are said to only be visible to honest people. As such, throughout the game, Link will appear to the player and most other characters as if he is wearing his blue pajamas, often eliciting changes in dialogue in certain places. Despite this, characters such as the Great Deku Tree continue to act as though Link is still wearing the Hero's Clothes, suggesting his new outfit appears similar or identical to them. The shape of the Hero's New Clothes are also visible while using the Magic Armor and when Link is encased in a bubble during the end of the game -- in both cases, the outline of his signature floppy hat is visible on his head, despite him not appearing to be wearing one.

When Wolf Link fills the Vessel of Light and saves Faron the Light Spirit from Twilight, Link is returned to his human form, but wearing the Hero's Clothes rather than his previous outfit. Faron tells him that they were once worn by the ancient hero chosen by the gods.[1][2][3]

In Legend Mode, when Zelda confesses a recurring nightmare to Impa, the latter sees it as an omen of dark times ahead for Hyrule. Looking at a folded set of green clothes, she tells Zelda says they must find the reborn spirit of the Hero. Soon afterward, having seen a trainee named Link leap bravely into battle and apparently possess the Triforce of Courage, Impa presents Link with the Hero's Clothes and tells him to be a hero worthy of wearing the tunic.  The Armies of Ruin

Uniquely, this set of Hero's Clothes includes a long, cyan-blue scarf. Many recoloured variations of the tunic are available: