From Zelda Dungeon Wiki
Jump to navigation Jump to search
Want an adless experience? Log in or Create an account.
Water Bomb 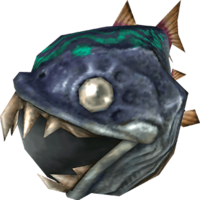 The Water Bomb is a type of Bomb from Twilight Princess. They are a variation of the Bomb, based on the Bombfish, sold to Link by Barnes in Kakariko Village. As the name suggests, they are the only Bombs in the game which can be used underwater, although they can be used on land as well. They are more expensive than regular Bombs, and Link's Bomb Bag can't hold as many. The only time in the game that they are necessary is after light is returned to Lanayru Province, as they are used to gain access to the Lakebed Temple.

Although Water Bombs are expensive, the payoff can be good, as underwater boulders usually house a large amount of Rupees. They can also be used in Zora's Domain after Midna drops the Death Mountain boulder into the frozen water. If Link blows up this boulder, then a Goron that was somehow trapped inside will be freed and give Link an extra Bomb Bag with 30 Bombs.