This article is about the Twilight Princess joke item. For other sorts of boot, some of which can even be worn, see Boot (Disambiguation). 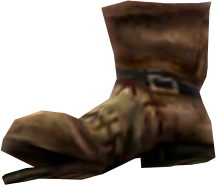 A Boot is an item that is seen in Twilight Princess. Among other junk items, Link may sometimes pull up a boot while Fishing instead of a fish.[1] Boots are discarded shoes that serve no useful purpose and must be disposed. If more than one boot is fished up during the same game play cycle, the description wonders why people even throw away boots.[2] When Hena is with Link and he catches one, she finds the situation hilarious and tells him to throw it away.[3] If he finds another one during the same period, she wonders who the boot belongs to.[4]