From Zelda Dungeon Wiki
Jump to navigation Jump to search
Want an adless experience? Log in or Create an account.
Fishing 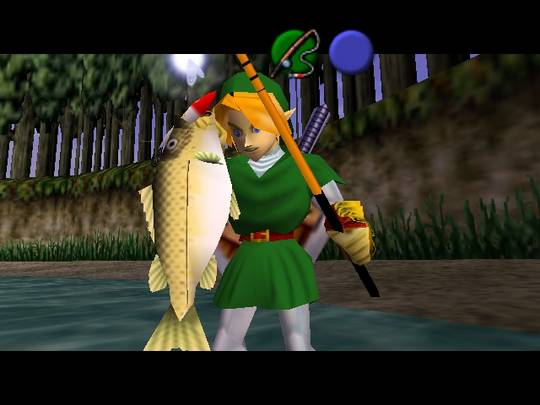 Link reeling in a fish in Ocarina of Time

Fishing has made an appearance in multiple The Legend of Zelda games, most notably in Ocarina of Time. Fishing has advanced over the years of the series.

Link can only fish at the Fishing Pond in Link's Awakening. There are two different sizes of Fish to catch, and, depending on the size, Link can receive a prize from the Fisherman there. It costs 10 Rupees to cast into the water.

Fishing in Ocarina of Time can only be done at the Fishing Pond, which is located at the back of Lake Hylia. It costs 20 Rupees to rent a rod, with no time limit. If, as a child, Link catches a Fish that weighs ten pounds or more, he gets a Piece of Heart as a reward. Furthermore, as an adult, if he catches a Fish of 15 pounds or more, he receives the Golden Scale as a reward.

In Twilight Princess, fishing can be done using the Fishing Rod that Link receives early in the game in most bodies of water. His Fish Journal records the sizes of the fish he catches. Additionally, lure fishing is available at Hena's Fishing Hole, which is located in Upper Zora's River, to the north of the area. It costs 20 Rupees to fish alone with no time limit, but for 100 Rupees, Hena joins Link as a guide.

After Link receives the Fishing Rod from the Old Wayfarer in Phantom Hourglass, he can see the shadows of fish on his Sea Chart. When Link approaches one, he is able to cast out a line into the water and reel it in.

Fishing was added in the 3D remake of Majora's Mask, and therefore is not in the N64 or Virtual Console version of the game.