This article is about character in Link's Awakening. For other Fishermen, see Fisherman (Disambiguation). 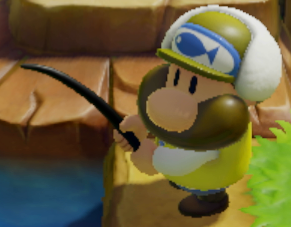 The first Fisherman in Link's Awakening (2019)

In Link's Awakening, there are two Fishermen on Koholint Island.

The first Fisherman can be found at the Fishing Pond in the north of Mabe Village. He lets Link fish for 10 Rupees.[1] If Link catches one of the larger fish, he gets a Piece of Heart or 20 Rupees.[2] If it is a small one, he gives Link 5 Rupees.[3] He also rewards Link Chamber Stones and Secret Seashells for certain catches in the Switch remake.

The second Fisherman plays a role in the Trading Sequence. He spends his time Under the Bridge in Martha's Bay. However, he loses his Fishing Hook and cannot catch anything.[4] If Link gives Grandma Yahoo a Broom, she hands him the Fisherman's lost hook, which she claims to have found by the river.[5] The Fisherman gladly takes the hook back, in return for his next catch.[6] His next catch turns out to be the Mermaid's Necklace.[7]