From Zelda Dungeon Wiki
Jump to navigation Jump to search
Want an adless experience? Log in or Create an account.
Dampé 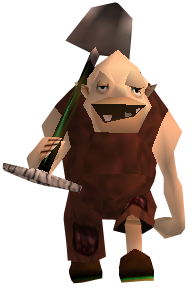 Dampé is a recurring character in The Legend of Zelda series. Appearing in six games, he is the gravekeeper and caretaker of the Graveyard in each respective game, except for the HD remake of Link's Awakening, where he provides access to the Chamber Dungeons.

In Ocarina of Time, Dampé is the gravekeeper of the Kakariko Village Graveyard. During Link's childhood, Dampé can be found patrolling the graveyard at night and starts his own Gravedigging Tour, upon request for 10 Rupees, digging up anything from Rupees to a Heart Piece that Link can pick up.[3] The items that he digs up appear randomly. During the day, he is at his shack sleeping, and if Link tries to interact with him, he tells the young hero to go away.[4]

Sometime during Link's seven year slumber, Dampé dies and becomes a ghost. When Link digs up his grave, he can find Dampé's ghost in a maze beneath the grave. Dampé challenges Link to a race, and if Link wins, Dampé allows him to take his treasure, the Hookshot.[5][6] Playing again and winning in under a minute earns Link a Piece of Heart.

In Majora's Mask, Dampé is the gravekeeper of the Ikana Graveyard, which is a haunted graveyard, yet he is afraid of ghosts. On the Final Day, Link can find Dampé Beneath the Graveyard, where he admits to be searching for the Ikana Royal Family's treasure. However, he lost his lantern and cannot see. He, in turn, asks Link to guide him using the light of his fairy, Tatl.[7] Leading him to the Soft Soil spots causes him to dig there.[8] After he has dug up three Blue Flames, a Big Poe appears. Since Dampé is afraid of ghosts, he runs away to his house, and if Link defeats the Poe, he is rewarded with a chest that contains an Empty Bottle.[9]

Dampé is the only human inhabitant of The Swamp in Four Swords Adventures, where he lives by himself in a house in the northwest of the graveyard. However, his house is surrounded by many Giant Ghinis that prevent the Links from entering. In order to enter Dampé's home, the Links must stand on four separate switches to light up the torches, defeating the Giant Ghinis.

When the Links enter his house, Dampé warns them that it is dangerous outside, so the Links shouldn't be wondering around the graveyard. Recently, a shadowy guy has been stirring up trouble recently who looks just like the Links. Dampé tells them his name and explains he is supposed to be the caretaker of the graveyard, but he cannot take care of anything right now and is helpless as the creatures that have overrun the area are pleased and treat Hyrule like their new home.

Dampé then demands the Links to listen to a legend. According to the legend, a Dark Tribe were sealed away into a mirror long ago in which the mirror is supposed to be somewhere in the Forest of Light. However, the forest has been covered by pitch-black clouds recently, being a Forest of Dark now. Dampé thinks something bad is certainly happening at the forest.[10]

During the credits of the game, Dampé can be seen walking outside in the peaceful graveyard when the Green Shrine Maiden flies through The Swamp. 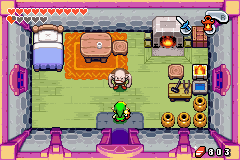 Like in Four Swords Adventures, Dampé is the only living inhabitant in the Royal Valley where he is the gravedigger at the cemetery there.[11] It is said that he has the power to speak with the dead. As a result of this, he fuses the Kinstones he digs up with the local ghosts.[12] When Link first talks to Dampé, he introduces himself and explains that he is the gravedigger. Dampé proceeds to ask him about what Link mentioned about being called to the Royal Valley by the ghost of a king. He informs Link that the ghost is an ancient king of Hyrule who rests there and explains that he has also seen the ghost. As a result of thinking how the king has called Link, Dampé cannot see any reason not to let him in, giving Link the Graveyard Key.[13]

Once Link leaves Dampé's house and gets the Graveyard Key stolen by a crow, Dampé can be found at the gate to the rest of the Royal Valley. When talked to, Dampé asks Link if a crow took the key and flew off into a tree. He then yells for him not to just stand around as the crow will get away. Dampé urges Link to charge at the tree if Link wants the key back. [14] After Link has reacquired the Graveyard Key from the crow, Dampé tells him that he will open the gate for Link and advices for him to be careful in there.[15]

If Link talks to Dampé after he opens the gate, he gives directions of left, left, left, up, up, and up, but he forgets the last turn,[16] turning out to be directions for a secret path to the Lost Woods-like forest in the Royal Valley that leads to 200 Mysterious Shells or 100 Rupees if he has collected every figurine.

In A Link Between Worlds, Dampé once again appears as the Gravedigger. He cares for the Graveyard found east of the Sanctuary. Despite his looks, Dampé is a kind-hearted person that cares for the Priest's daughter, Seres. Link first encounters Dampé in front of the Sanctuary, just before Yuga makes his first appearance in Hyrule.

In the Switch remake of Link's Awakening, Dampé's Shack serves as the way to access the Chamber Dungeons. These are customizable dungeons which can be created using rooms from previously explored dungeons. Dampé presents Link with an array of challenges involving the arrangement of rooms, each with different rewards.