From Zelda Dungeon Wiki
Jump to navigation Jump to search
Want an adless experience? Log in or Create an account.
Octavo 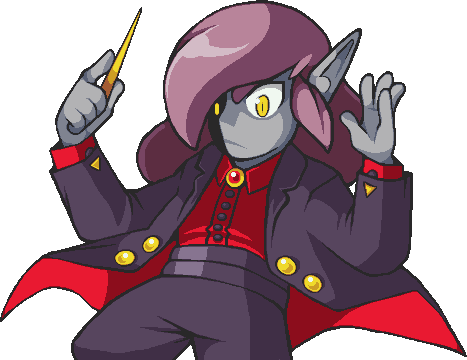 Octavo is one of the main antagonists in Cadence of Hyrule. He has the ability to attack and put people to sleep with music.

Octavo used this lute to put many important people around Hyrule to sleep, including the king of Hyrule.[2] He also created four champions: Bass Guitarmos, Gohmaracas, Gleeokenspiel, and Wizzroboe. He later reveals that these champions are meant to be an army to defeat Ganon in the future.[3]

Octavo waits at the top of Hyrule Castle, only emerging to summon his champions against the bearers of the Triforce. He explains to them that they must collect all of his magical instruments guarded by his champions in order to destroy the barrier he placed on the castle and find him.[4]

Octavo summons all of the previous bosses throughout the fight, and the player must defeat all of them in turn. He also calls down musical notes that are either green or red and require the player to switch between Link and Zelda to avoid the notes.

At the end of the battle, his Golden Lute is sucked into a portal. Octavo is furious and fears for how they will defeat Ganon.[5] When the player arrives in the future, they find Octavo, face down on the floor, where he says he was not strong enough to face Ganon alone.[6]

Octavo comes from the musical term octave, which refers to the interval between two music pitches in which the second pitch is double the frequency of the first.