This article is about the character who appears in Four Swords Adventures, A Link Between Worlds, Cadence of Hyrule, and Link's Awakening. For the recurring enemy in other games, see Dark Link. 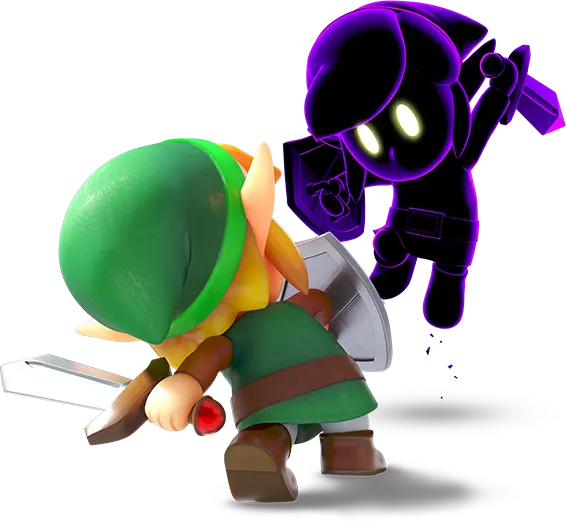 Shadow Link is a dark reflection of Link that appears in multiple The Legend of Zelda games.

In Four Swords Adventures, Shadow Link is both a main character and a recurring enemy and boss. The Dark Mirror creates an endless supply of Shadow Links; this causes them to appear many times throughout the game. Shadow Link first appears in Hyrule Castle where he kidnaps Princess Zelda and the Shrine Maidens. He then tricks Link into pulling the Four Sword out of its pedestal, releasing Vaati and splitting Link into four.

During Link's quest to save the Maidens and Princess Zelda, Shadow Link plagues Hyrule by terrorizing its citizens, who then blame the Links and demand they fix it. Shadow Links show up repeatedly in each level, often using an item such as Fire Rod to cause fires or attempting to dash into Link with the Pegasus Boots. Whenever a Shadow Link is defeated, it leaves behind a big green Force Gem.

On certain screens, Shadow Link appears and summons a Big Bomb. When this bomb explodes, all Links on screen die instantly. To avoid this, the Links must hide underground or underwater and attempt to navigate the level while hiding from the explosions. Shadow Link summons an endless supply of Big Bombs until the Links move to the next screen.

Aside from being a recurring enemy, Shadow Link is a repeated boss as well. He is the boss of the second stage in four different levels, meaning he appears at the end of the Cave of No Return, Village of the Blue Maiden, Desert Temple, and The Dark Cloud stages. In each stage except for The Dark Cloud, he takes on a certain color, and only the same colored Link is able to damage him. He also often transports back and forth to the Dark World. If the Shadow Link first shown in the cutscene for these battles is defeated before the others, all other Shadow Links die as well.

Shadow Link makes a guest appearance in A Link Between Worlds. In this game, whenever the player meets someone via StreetPass who owns the game, a version of the other person's Link joins their game as a Shadow Link who they may fight in a battle. Each player's Shadow Link carries the same armor and sword as they have in the game. They may also dispatch their shadows with two items of choice which the shadows use in battle by speaking with Gramps in Kakariko Village. Players themselves are allowed a choice of two weapons, as well as access to whatever weapon and armor with which they have to defend themselves. If a player successfully defeats Shadow Link, they are rewarded with a bounty dependent on the challenge given by their opponents, including the weapons they have equipped, the number of Heart Containers they have, and the armor and other gear they possess.

Shadow Link appears in various parts of Cadence of Hyrule. The earliest appearance occurs in the Kakariko Crypt if the player chose to wake Zelda first. Defeating him gives Zelda the Hibiscus Potion required to wake Link. If the player chose to wake Link first, Shadow Zelda will appear instead. In Single Character Mode, Shadow Link drops three Diamonds when defeated.

In Future World, Shadow Link will randomly appear as the miniboss of one of the floors of the maze. Defeating him will unlock the staircase and allow the player to move on.

With the release of the first DLC pack for Cadence of Hyrule, the player gains the ability to play as Shadow Link in Single Character Mode or All Character Mode. Besides the visual difference, Shadow Link plays the same way Link does.