From Zelda Dungeon Wiki
Jump to navigation Jump to search
Want an adless experience? Log in or Create an account.
Dark Mirror 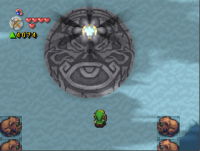 The Dark Mirror appears in Four Swords Adventures. It is an evil object that reflects the evil in the heart of a person and brings it to life.[1][2] Long ago, the mirror was used to seal away a Dark Tribe.[3][4][5] As a result, it was hidden away in the Temple of Darkness within the Forest of Light, where the White Maiden protected it as a part of her domain.[4]

Link, split by the Four Sword into four, first hears about the mirror from Dampé in The Swamp. He believes that the mirror is the reason that the spirits in the graveyard are active.[4] Later, when the Links rescue the White Maiden, she further explains the Dark Mirror's capabilities, telling them about how it was hidden in her forest to keep it away from the hands of evil at all costs.[5] She suggests that they locate the mirror to keep is safe.[6]

However, once they fight their way through the Temple of Darkness, they are shocked to find that the mirror has already been stolen.[2] The Red Maiden expresses her concern as well.[7] Then the White Maiden mentions how she heard Deku Scrubs in the forest worshipping the name Ganon.[8] In truth, Ganon, formerly known as a thief named Ganondorf, had stolen the Dark Mirror from the temple.[9] He then used it to create Shadow Links, dark alter egos of Link.[10][11]

Soon, the Links make their way up to the Realm of the Heavens to face Vaati and Ganon. In The Dark Cloud, they find the Dark Mirror within a strange eye-like barrier, incessantly spewing out Shadow Links.[12] Even as they defeat Shadow Links, more of them continue appearing. Finally, Zelda appears and prevents the mirror from spawning more Shadow Links by closing the barrier's eye.[13] After defeating all of the remaining Shadow Links, Zelda removes the mirror and destroys the barrier, and the Dark Mirror is safe at last.[14][15]